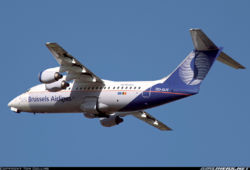 The BAe 146 is a medium-sized commercial aircraft which was manufactured in the United Kingdom by British Aerospace (which later became part of BAE Systems). Production ran from 1983 until 2002, switching to an improved version known as the Avro RJ in 1992. A further-improved version, the Avro RJX – with new engines – was announced in 1997, but only three prototypes were built before production ceased in late 2001.

The BAe 146/Avro RJ carries its four turbofan jet engines on a high wing above the fuselage (not below, or at mid-fuselage, as on most conventional civilian aircraft) and has a T-tail. The aircraft has STOL capabilities and very quiet operation; it has been marketed under the name Whisperjet. It sees wide usage at small city-based airports. In its primary role it serves as a regional jet, short-haul airliner or feederliner. The BAe 146/Avro RJ is in wide use among European airlines, such as Lufthansa and SN Brussels Airlines. The freight-carrying version has the designation "QT" (Quiet Trader), while a convertible version is designated "QC".

Hawker Siddeley carried out the original design in 1973 using the designation HS.146, but soon abandoned the project as a result of the world economic downturn resulting from the 1973 oil crisis. Low-key development proceeded, however, and in 1978 British Aerospace, Hawker Siddeley's corporate successor, re-launched the project. The name 146 comes from the original De Havilland design number, DH146, which was continued by Hawker Siddeley. The type name "Avro RJ" superseded "BAe 146" in 1993. 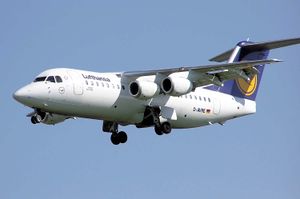 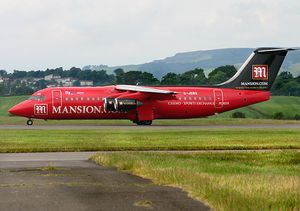 Higher thrust LF507 turbofan engines from Honeywell, housed in newly designed nacelles, replaced the original ALF-502 Lycoming engines. Production of this aircraft has ended, with the final four aircraft being delivered in October-November 2003. Many airlines are predicted to replace the Avro/BAe with the Airbus A318, Bombardier CRJ 700, or Embraer models such as the Embraer 170 and Embraer 190.

The early aircraft were built at what was the original De Havilland factory at Hatfield, Hertfordshire. The Avro RJ family of aircraft was built at the BAE Systems Regional Aircraft Centre at the Avro Airfield at Woodford in England. 166 Avro RJ aircraft were delivered between 1993 and 2002.

The aircraft have proven to be useful on "high" density regional and short-haul routes. One of the main features of the BAe 146 that made it different from other regional aeroplanes is the fact that it features six-abreast seating which proves to be more comfortable than the more traditional four- or five-abreast seating of planes in its class. The plane is also renowned for its relatively low noise generation, a positive feature which won the hearts of many operators who wanted to fly in and out of noise stringent airports within cities.

The ALF 502 turbofans were derived from Lycoming's helicopter turboshaft designs and suffered from some reliability problems. The internal electronics were prone to overheating which could trigger an automatic shutdown of an engine with no option of in-flight restarting, and certain rare atmospheric conditions caused loss of engine thrust due to internal icing.[2]. As the result, BAe 146 mechanics quipped that "BAe" stood for "Bring Another Engine." In recent years, there have been cases where toxic fumes from engine oil have entered the air-conditioning system and entered the cockpit, adversely affecting the pilots. [3].

First flight of the -100 occurred on 3 September 1981,[4] with deliveries commencing in 1983. The launch customer in March 1983 was Dan-Air soon followed by the RAF's Royal Flight. The -100 migrated last to the Avro RJ standard development, with first deliveries of the RJ70 beginning in late 1993. The RJ70 differed from the 146-100 in having FADEC LF 507 engines and digital avionics. The RJ70 seats 70 passengers, 82 six abreast or 94 in high-density configuration.

Designers' initial proposals for the -300, the final development of the 146 product line, included a 3.2 m extension to the fuselage of the -200, more powerful engines and winglets. However due to the requirements of airlines for higher efficiency rather than capacity the production 146-300 emerged as a 2.44 m stretch of the -200, without winglets or the proposed ALF 502R-7. Deliveries began in December 1988. The Avro version of the 146-300, the second such development of the 146 product line, became the RJ100. It shared the fuselage of the 146 version, but with interior, engine and avionics improvements. The most common configuration in the RJ100 seats 100 passengers. The RJ115 seats 116 as standard or up to a maximum of 128 in a high-density layout.

The RJX-70, RJX-85 and RJX-100 aircraft represented advanced variants of the Avro RJ Series. The RJX used Honeywell AS977 turbofans for greater efficiency (15% less fuel-burn, 17% increased range), quieter performance and 20% less maintenance costs. Druk Air of Bhutan placed orders for two RJX-85s, while British European placed orders for 12 RJX-100s. However, BAE Systems terminated the project in December 2001, having completed and flown only three aircraft - a prototype each of the RJX-85 and RJX-100, and a production RJX-100 for British European. BAE reached an agreement with Druk Air and British European in early 2002 in which the airlines agreed not to enforce their firm orders for the RJX. BAE explored the possibility of manufacturing 14 "hybrid" aircraft, however British European at least was unwilling to accept the risk of operating a unique type.[5]

The termination of the RJX project marked the end of commercial airliner-production in the United Kingdom.

Having extremely large flaps and spoilers, and a large split air brake mounted in the tail, the plane does not need reverse thrust at landing. Consequently, the four engines (supplied by the U.S. manufacturer Lycoming) do not have this facility.