The Boeing XB-15 (Boeing 294) was a bomber aircraft first designed in 1934 as a test for the United States Army Air Corps to see if it was possible to build a heavy bomber with a 5,000 mile (8,000 km) range. It was originally designated the XBLR-1 (experimental bomber, long range). When it first flew, it was the most massive and most voluminous airplane ever built in the United States. It set a number of load-to-altitude records, including a 31,205-pound flight to 8,200 feet (July 30 1939).

The aircraft's immense size allowed for passages within the wing, which the crew could use to make minor repairs in flight. Due to the technology of the time, a 5,000 mile flight took several days; the crew was made up of several shifts, and bunks allowed them to sleep when off duty.

The XB-15 parked on an airstrip.
From the Maxwell Air Force Base website

The XB-15 was designed around liquid-cooled 1,000 hp (750 kW) engines. Unfortunately, these were not available, and 850 hp (637 kW) engines were used instead. These engines left the bomber significantly underpowered; its top speed of 200 mph (322 km/h) was far too slow for a combat aircraft, and the project was abandoned. Even without the improved defensive armament that would have been needed in service, the XB-15 had a maximum takeoff weight 5,000lbs greater than the later B-17G, but with a total engine output of 1,400 less horsepower.

No B-15s were put into service; the Army Air Corps converted the only prototype into a transport designated the XC-105, which carried freight around the Caribbean during the war. The sole XC-105 was scrapped in Panama in 1945.

Despite its cancellation, the XB-15 did feature a number of significant innovations: 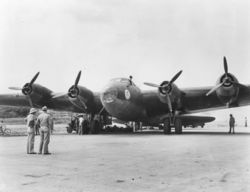 World's second largest land-plane goes to Caribbean. The B-15, huge experimental bomber built several years before the B-19.