C-108 Flying Fortress was the designation assigned to four B-17 Flying Fortresses that were converted to serve as cargo aircraft. After some experimentation with the idea, the concept was abandoned. 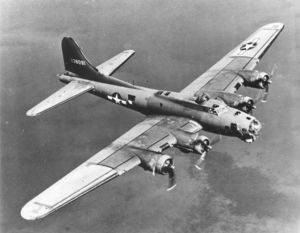 The original plane behind the C-108: the B-17 Flying Fortress.
From the Maxwell Air Force Base website (original image).

The first C-108 built (designated XC-108) was a B-17E converted to be used as a V.I.P. transport for General Douglas MacArthur in 1943. With the exception of the nose and tail turrets, all armament was removed, as was all armor. The interior of the plane was made into a flying office for MacArthur, with extra windows, cooking facilities, and living space. To facilitate entry and exit, a drop-down door with steps was installed in the rear fuselage. A similar conversion was made on a B-17F, and designated YC-108.

In March 1944, another B-17E was converted to a cargo aircraft designated XC-108A. Hoping to convert obsolete bombers into cargo aircraft, a program of conversion was initiated at Wright-Patterson Air Force Base. The plane was stripped of armament, armor, and other military equipment. Crew locations were shifted, and the nose was modified to provide space for cargo and/or personnel. In this new arrangement, the cockpit had to be accessed via the crawlway under it or through the hinged solid nose cone that had replaced the "greenhouse" turret of the original design. To facilitate the plane to cargo carrying, several bulkheads were removed and the bomb bay doors welded shut. This allowed most of the plane to be used to carry either cargo or troops.

Based in India, the XC-108A was used to fly material and over the Himalaya to the B-29 base in Chengdu, China. Due to chronic engine difficulties, it proved a difficult cargo plane. In October 1944, it was sent back to the United States. By the end of the war, it was disassembled and left in a junkyard in Maine. In 1985, a vintage airplane buff acquired the pieces, and they were transported to an airport in Illinois. The owner hopes to restore it to B-17E configuration, which would make it the only surviving B-17E.

The last C-108 was the XC-108B, B-17F converted for service as a tanker. It was to be used in the same line of work as the XC-108A: carrying material (in this case, fuel) over the Himalaya to the base in Chengdu. As in the XC-108A, it was devoid of armor and weapons, and the fuselage had been modified to make space for its cargo. The fuselage was filled with fuel tanks.

Several other cargo transports and VIP transports were made from the B-17, under the designations CB-17 and VB-17, respectively.