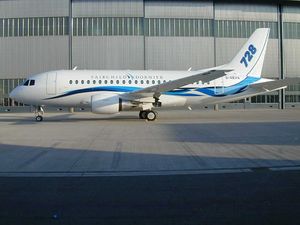 The 728 family was Fairchild-Dornier's ambitious bid to develop a range of regional jet airliners to supplement the smaller 328JET series, and attracted strong airline interest when launched. Although the aircraft was a modern design, the program ended with the insolvency of Fairchild Dornier.

The lead aircraft in the program was the 70 to 85 seat 728 (previously named 728JET), which made its official roll-out on March 21, 2002, and it was scheduled to make the first flight in the summer of 2002. Deliveries should have started in mid 2003 to Lufthansa Cityline.

Following the 728 into service would have been the stretched 95 to 110 seat 928, with first flight scheduled in late 2003, and entry into service in 2005. Apart from the stretched fuselage - cabin length from behind the flightdeck would have been 23.05 m (75 ft 7 in) allowing seating for 95 to 110 passengers - it would also have featured an increased wing span. The shortened 55 to 65 seat 528 (23.38 m (76 ft 9 in) fuselage length and 15.84 m (52 ft 0 in) cabin length) would have followed the 928. The three types would have featured a high degree of commonality, including engine type, and the same flightdeck, allowing a common pilot type rating.

Fairchild Dornier also launched a corporate jet version of the 728, the Envoy 7, which was foreseen to enter service in 2004. The Envoy 7 had intercontinental range and would be equipped with Fairchild Dornier's "Super Shark" winglets.

Corporate versions of the 528 and 928, the Envoy 5 and Envoy 9 respectively, were also planned.

Fairchild Dornier (at this time Dornier Luftfahrt GmbH) announced the project in November 1997 at the Dubai air show. The Company Dornier launched this new family of regional jets seating from 55 to 100 passengers on May 19 1998, with provisional launch orders from Lufthansa (60 firm orders and 60 options) and Crossair. Crossair later cancelled it's orders after learning from modifications that were made after recommendations by Lufthansa. To prevent that Low-cost carriers could equipp the 728 with a six-abreast seating, instead of the Cityline's five-abreast seating, Lufthansa made Fairchild Dornier reduce the fuselage diameter. It shrinked from original 3,40 m (11 ft 2 in) to 3,25 m (10 ft 8 in). The reduction also lowered the weight of the aircraft, but brought Crossair to choose the Embraer ERJ-170 family.

In June 2000 GECAS ordered 50 aircraft firm and additional options up to 100 aircraft.

March 2001 saw the beginning of the final assembly of the first prototype.

In January 2002 the first prototype moved on its own landing gear for the first time.

In March 2002 the TAC 03 is transported to the firm IABG in Dresden for structural testing.

Overall eight customers, among them Lufthansa Cityline, GECAS, Bavaria Leasing, CSA-Czech Airlines, and SolAir, had (by March 2002) placed firm orders for 125 aircraft and signed options for an additional 164.

However, before the first flight of the 728 had been made, Fairchild Dornier filed for insolvency on April 2 2002, and the whole ambitious program came to an end, because shortly afterwards Lufthansa & GECAS cancelled their orders. Without the backup of the biggest customers the program paused and the search for new investors began.

In the summer of 2003 the D'Long investment group showed interest in buying the project and a new firm was established to took on the project. Therefore in July 2003 the structural tests in Dresden were launched.

But in 2004 the new firm also went bankrupt. So in February 2005 the bankrupt's estate was auctioned.

The TAC 01 was completed with equipment, the second prototype was a complete fuselage in an unfinished stage of installations. The TAC 03 was just a fuselage for structural tests. It was brought to Dresden before the insolvency of Fairchild Dornier.

The auction sold (beneath many other things) also the prototypes.

The following data is just estimated, because it never was proven in flight tests.