The Westland WS-61 Sea King is a British license-built version of the American Sikorsky S-61 helicopter of the same name, built by Westland Helicopters now AgustaWestland. The aircraft differs considerably from the American version, with British-built Gnome engines, British made anti-submarine warfare systems and a fully computerised control system. The Westland Sea King was also produced as the Commando troop transport version for export.

Westland Helicopters signed a licence agreement with Sikorsky in 1969 to use the airframe and rotor system of the Sikorsky Sea King to meet a British Royal Navy requirement for an Anti-submarine warfare helicopter to replace the Westland Wessex. The prototype and pre-production aircraft were built using Sikorsky-built components. The first Westland-built aircraft, the first production aircraft for the Royal Navy designated the Sea King HAS1, first flew on the 7 May 1969 and was delivered to the navy in the same year.

The last Sea King to be built by Westland was at Yeovil in 1990 and the last of the Royal Navy Sea King ASW helicopters was retired in 2003, being replaced by the AgustaWestland Merlin HM1. The Airborne Surveillance and Area Control (ASaC) or Airborne Early Warning (AEW) variant is expected to be replaced in time for the two Queen Elizabeth-class aircraft carriers. The types in contention are a Merlin derivative, a V-22 Osprey variant or a derivative of the E-2C Hawkeye. The HC4 commando variant is also expected to be replaced within the next decade along with Search and Rescue variants. 330 were produced in total.

The basic ASW Sea King has been upgraded numerous times, becoming the HAS2, HAS5 and HAS6, the latter of which has been replaced by the AgustaWestland Merlin ASW helicopter. Surviving aircraft are having the mission equipment removed and the aircraft are being used in the utility role.

A troop carrying version marketed as the Commando was developed for the Egyptian Air Force. A Commando variant, but retaining the folding blades and tail of the ASW variants, was designated the Sea King HC4 by the Royal Navy and is still in service as an important asset for amphibious assaults. It is capable of transporting 27 fully equipped troops with a range of 400 miles (640 km).

A dedicated Search and Rescue version (Sea King HAR3) was developed for the Royal Air Force, and the first of 15 entered service from September 1977 to replace the Westland Whirlwind HAR10. A sixteenth aircraft was ordered shortly after, and following the Falklands War of 1982, three more aircraft were purchased to enable operation of a Search and Rescue Flight in the islands, initially from Navy Point on the north side of Stanley harbour, and later from the RAF airfield at Mount Pleasant. In 1992 six further aircraft were ordered to replace the last remaining Westland Wessex helicopters in the Search and Rescue role. The six (Sea King HAR3A) had updated systems including, uniquely amongst all the marks of Sea King in UK service, a digital autopilot with coupled navigation system. Search and rescue versions of the Sea King were produced for the Royal Norwegian Air Force, and the German Navy, and later for the Belgian Air Force. The Royal Air Force aircraft are in service with 22, 202, 203(R) and 78 Squadrons. Some Royal Navy HAS5 ASW variants were adapted for Search and Rescue.

The latest variant of the Sea King is the ASaC, formally known as Airborne Early Warning (AEW). The Royal Navy AEW capability had been lost when the Fairey Gannet aeroplane was withdrawn after the last of the RN's fleet carriers, HMS Ark Royal, was decommissioned in 1978. During the Falklands War a number of warships were lost, with casualties, due to the lack of an indigenous AEW presence - the RAF Shackleton AEW.2 proposed fleet cover was too unresponsive and at too great a distance to be practical. Two HAS2 Sea Kings were modified in 1982. They were both flying within 11-weeks as the AEW2A and deployed with 824 'D' Flight on HMS Illustrious and served in the Falklands after the cessession of hostilities. Later versions of this Sea King variant came into operational service in 1985, being deployed by 849 Naval Air Squadron. Thirteen Sea Kings were eventually modified. The main modification is the addition of the Thales Searchwater radar which is attached to the side of the fuselage on a swivel arm and protected by an inflatable dome. This allows the helicopter to lower the radar below the fuselage in flight and to raise it for landing. The aircraft were further modified and designated AEW7 with the removal of redundant equipment most noticeably the ASW radome above the rear fuselage.

The latest ASaC Sea King is the ASaC7, which is deployed on the Royal Navy's Invincible class aircraft carriers. The ASaC7 is a further upgrade of the AEW7. The main role of the ASaC Sea King is detection of low flying attack aircraft. It also provides interception/attack control and over-the-horizon targeting for surface launched weapon systems. In comparison to older versions, the new radar enables the ASaC7 to simultaneously track 400 targets instead of the earlier 250 targets.

The ASaC7s will remain in-service until they are replaced under the Future Organic Airborne Early Warning (FOAEW) programme, which will operate from the UK's future carrier, CVF.

The Sea King proved her remarkable versatility and endurance during the Falklands War, performing mainly anti-submarine search and attack, also replenishment, troop transport and Special Forces insertions into the occupied islands. On 23 April 1982, a Sea King HC4 was ditched while performing a risky transfer of supplies to a ship at night, while operating from the flagship HMS Hermes.

One of the most mysterious events of the war occurred on 17th May, when a Sea King HC Mk4 landed at Punta Arenas, Chile and was subsequently destroyed by its crew. The three crew later gave themselves up to Chilean authorities. They were returned to the UK and were given gallantry awards for the numerous dangerous missions that they had undertaken. [1]

One of the most tragic accidents during the Falklands War came on 19 May. A helicopter had been transporting Special Air Service (SAS) troops to HMS Intrepid from Hermes and was attempting to land on Intrepid. A thump was heard, and the Sea King dipped and crashed into the sea, killing 22 men. However, nine survived this accident, but only after jumping out of the Sea King just before the helicopter crashed. Bird feathers were found in the debris of the crash, which appeared to suggest that this accident was the result of a bird strike, though this theory is debated. The SAS lost 18 men in that crash, their highest number of casualties on one day since World War II. The Royal Signals lost one man and the RAF one man.

The Sea Kings during the 1991 Gulf War had a limited role, compared to their wide ranging task during the Falklands War. Its roles included air-sea rescue, inter-ship transporting duties and transporting Royal Marines onto any suspect ships that refused to turn around during the enforced embargo on Iraq.

The Sea King participated in the UN's intervention in Bosnia, with Sea Kings operated by 820 Naval Air Squadron and 845 Naval Air Squadron. The Sea Kings from 820 NAS were deployed from Royal Fleet Auxiliary ships Fort Grange (since renamed Fort Rosalie) and Olwen. They provided logistical support, rather than the ASW role that the Squadron was geared towards, ferrying troops as well as supplies across the Adriatic Sea. They performed over 1,400 deck landings, flying in excess of 1,900 hours. The Sea Kings from 845 NAS performed vital casualty evacuation and other tasks. Their aircraft were hit numerous times, though no casualties were incurred.

During NATO's intervention in Kosovo, a British led operation, Sea Kings from 814 Naval Air Squadron, operated aboard HMS Ocean and RFA Argus and also on destroyers and frigates. They provided search and rescue (SAR), as well as transporting troops and supplies.

File:Seaking helikopter.JPG
A Sea King in service with the Royal Norwegian Air Force

On March 22, 2003, two AEW Sea Kings from 849 NAS operating from Ark Royal collided over the Persian Gulf, killing six Britons and one American.

During the Gulf Wars the Sea Kings provided logistical support, transporting Royal Marines from their off-shore bases on Ark Royal, Ocean and other ships on to land in Kuwait.

In July 2006 Sea King HC.4 helicopters from RNAS Yeovilton were deployed to Cyprus to assist with the evacuation of British citizens from Lebanon.

The Sea King replaced the Westland Wessex HAS31 as the Royal Australian Navy's Anti-Submarine Warfare helicopter from 1974. The aircraft were typically fitted with Racal ARI 5955/2 lightweight radar, Racal Navigation System RNS252, Racal Doppler 91, ADF Bendix/King KDF 806A and Tacan AN/ARN 118. All surviving Mk50 airframes were upgraded to Mk50A standard, through a mid-life extension. In 1995, the AQS-13B sonar was removed and since then, the Sea King's main role changed to maritime utility support. During the first five years of operation, a number of aircraft were lost due primarily to a loss of main gearbox oil.

The Fleet Air Arm's Sea King fleet will be replaced earlier than was originally planned in response to the loss of a Sea King providing humanitarian aid in Indonesia in April 2005 due to mechanical failure. The crash resulted in the deaths of nine Australian military personnel. Australian Sea Kings played an integral part in the relief effort for the December 2004 Indian Ocean Tsunami, particularly in Indonesia's Aceh province where they delivered medical teams and aid supplies from Royal Australian Navy ships. The Australian Sea Kings will be replaced by the MRH 90. 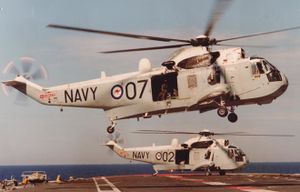