The Schweizer 300 (formerly Hughes 300) family of light utility helicopters was originally produced by Hughes Helicopters, as a development of the Hughes 269. Now manufactured by Schweizer Aircraft, a recent subsidiary of Sikorsky Aircraft, the basic design has been in production for almost 50 years. The single, three-bladed main rotor and piston-powered Schweizer 300 is mostly used as a cost-effective platform for training and agriculture.

In 1955, Hughes Tool Company's Aircraft Division carried out a market survey which showed that there was a demand for a low-cost, lightweight two-seat helicopter.[1] The division began building the Model 269 in September 1955. The prototype flew on 2 October 1956,[2] but it wasn't until 1960 that the decision was made to develop the helicopter for production.[1]

On 9 April 1959, the 269 received certification from the FAA and Hughes continued to concentrate on civil production. With some design changes, deliveries of the Model 269A version began in 1961. By mid-1963 about 20 aircraft were being produced a month and by the spring of 1964, 314 had been built.[1] Hughes had successfully captured a large portion of the civilian helicopter market[2] with an aircraft that would prove itself popular in agriculture, police work and other duties. 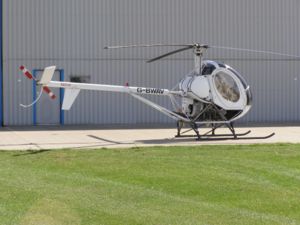 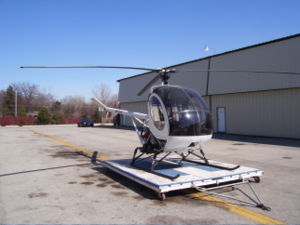 In 1964, Hughes introduced the slightly-larger three-seat Model 269B which it marketed as the Hughes 300. That same year, the Hughes 269 set an endurance record of 101 hours. To set the record, two pilots took turns piloting the aircraft and hovered in ground-effect for fueling. To ensure no cheating, eggs were affixed to the bottom of the skid gear to register any record-ending landing.[2]

The Hughes 300 was followed in 1969 by the improved Hughes 300C (sometimes 269C), which first flew on 6 March 1969 and received FAA certification in May 1970.[1] This new model introduced a more powerful 190hp (140kW) Lycoming HIO-360-D1A engine and increased diameter rotor, giving a payload increase of 45%, plus overall performance improvements.[3] It was this model that Schweizer began building under license from Hughes in 1983.[4]

Between Hughes and Schweizer, and including foreign-licensed production civil and military training aircraft, nearly 3,000 copies of the Model 269/300 have been built and flown over the last 50 years. And that would be the end of the story, however, Schweizer continued to develop the Model 300 by adding a turbine and redesigning the body to create the Schweizer 330. And then further developing the dynamic components to take greater advantage of the power of the turbine engine led to the development of the Schweizer 333.

Schweizer was purchased on August 26, 2004, by Sikorsky Aircraft. The Schweizer 300 models fill a gap in the Sikorsky helicopter line, which is known for its medium and heavy utility and cargo helicopters. Sikorsky has since taken advantage of Schweizer's rapid prototyping technology, originally used during development of the 333 dynamic components and the RQ-8 Fire Scout prototype, to develop the X-2 Technology Demonstrator. [5]

The Hughes 269 was created with a fully articulated, counter-clockwise rotating, three-bladed main rotor, and a two-bladed tail rotor that would remain as distinctive characteristics of all its variants. It also has shock absorber-dampened, skid-type landing gear. The flight controls are directly linked to the control surfaces of the helicopter so there are no hydraulics in the 269. There are generally two sets of controls, although this was optional on the civil 269A. For three-seat aircraft, the middle collective control stick is removable and a seat cushion can be put in its place for the third passenger. In the 300CB and 300CBi, the collective control can be repositioned to left handed configuration for the Pilot In Command position (right seat).

269C "Model 300C"
The 300C was powered by a 190 hp (141 kW) Lycoming HIO-360-D1A and had a larger diameter main rotor (26 ft 10 in compared to 25 ft 4 in). The larger rotor and engine giving it a 45% performance increase over previous 269-models. Hughes and Schweizer both marketed the 269C as the Model 300C.
300CQ
The Sky Knight is a purpose built 300C for urban police helicopter patrols with a muffler and other noise attenuating materials and design changes to reduce the helicopter's noise signature by 75%. 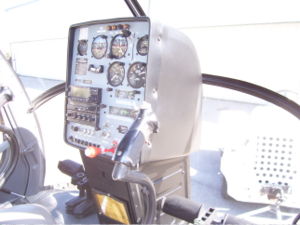 300CB
The 300CB is the first pure production of the 300 by Schweizer and is powered by a Textron Lycoming HO-360-G1A, 180 hp engine. The 300CB first flew on 28 May 1993, and was certified by the FAA in August 1995. The 300CB can be reconfigured from a two-seat cockpit, to a three-seat configuration. And, while it is still suited for utility and special missions, this aircraft is designed to target helicopter training.
300CBi
A fuel injected version of the 300CB that alleviates carburetor icing concerns in colder temperatures. The 300CBi also includes overspeed protection and automatic rotor engagement during startup as well as a low rotor RPM warning system.