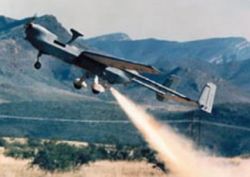 The RQ-5 Hunter unmanned aerial vehicle (UAV) was originally intended to serve as the United States Army's Short Range UAV system for division and corps commanders. It took off and landed (using arresting gear) on runways. It used a gimbaled EO/IR sensor to relay its video in real time via a second airborne Hunter over a C-band line-of-sight data link. The RQ-5 is based on the Hunter UAV that was developed by Israel Aircraft Industries.

Hunter deployed in 1999 to Kosovo to support NATO operations. Although production was cancelled in 1996, seven low rate initial production (LRIP) systems of eight aircraft each were acquired, four of which remained in service: one for training and three for doctrine development and exercise and contingency support. Hunter was to be replaced by the RQ-7 Shadow.

The Army's Unmanned Aircraft Systems Training Battalion at Fort Huachuca, AZ trains soldiers and civilians in the operation and maintenance of the Hunter UAV.

The "R" is the Department of Defense designation for reconnaissance; "Q" means unmanned aircraft system. The "5" refers to it being the fifth of a series of purpose-built unmanned reconnaissance aircraft systems. A version armed with the Northrop Grumman BAT/Viper Strike weapon system is known as the MQ-5A/B.

In 2004, the United States Department of Homeland Security, Customs and Border Protection Bureau, Air and Marine Office utilized the Hunter under a trial program for border patrol duties. During this program, the Hunter flew 329 flight hours, resulting in 556 detections.[1]