The Piasecki H-21 Workhorse/Shawnee is an American helicopter, the fourth of a line of tandem rotor helicopters designed and built by Piasecki Helicopter (later Boeing Vertol). Commonly called the "flying banana", it was a multi-mission helicopter, utilizing wheels, skis, or floats. It was used for Arctic rescue because it performed so well at low temperatures. 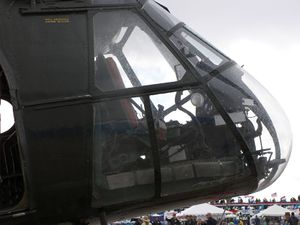 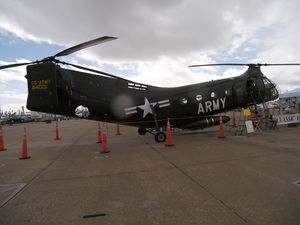 Piasecki Helicopter designed and successfully sold to the US Navy a series of tandem rotor helicopters, starting with the HRP-1 of 1944. The HRP-1 was nicknamed the "flying banana" because of the upward angle of the aft fuselage that ensured the large rotors did not hit each other in flight. The name would later be applied to other Piasecki helicopters of similar design, including the H-21.

In 1949, Piasecki provided the H-21 Workhorse to the USAF, which was an improved, all-metal derivative of the HRP-1. 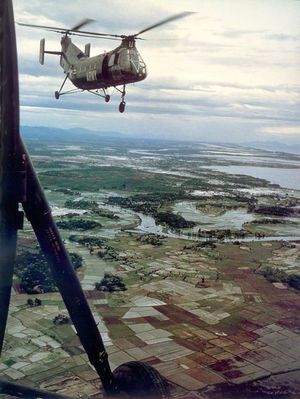 A Shawnee over rice paddies in Vietnam.

In 1956, seeking a way to use helicopters in a ground attack role in the Algerian War, the French Air Force experimented with arming the Sikorsky S-55, then being superseded in service by the more capable Piasecki H-21 and Sikorsky H-34 helicopters. The H-19 was originally fitted with a 20-mm cannon, two rocket launchers, two 12.7-mm machine guns, and a 7.5-mm light machine gun firing from the cabin windows, but this load proved far too heavy, and even more lightly-armed H-19 gunships proved underpowered. Some Piasecki H-21 helicopters were subsequently armed with fixed, forward-firing rockets and machine guns and a few even had racks for bombs, but the H-21 lacked the maneuverability and performance needed for offensive action. Most CH-21s in service were eventually fitted with a door-mounted 12.7- or 20-mm gun for self-defense only.[1][2][3]

The Sikorsky CH-34 was also modified into a gunship by the French Navy. While the CH-34 was effective in the ground attack role, official evaluations at the time indicated that the CH-21 was more likely to survive multiple hits by ground fire than was the CH-34; this was assumed to be a consequence of the location and construction of the CH-34's fuel tanks. Nevertheless, by the close of the Algerian War, attack helicopters such as the CH-34 were being used in synchronized operations with troop-carrying CH-21 helicopters in large-scale counterinsurgency operations.[4][5][6]

The CH-21B assault helicopter could carry 22 fully-equipped troops, or 12 stretchers, plus space for two medical attendants, in the MedEvac role. The CH-21B was first deployed to Vietnam in December 1961 with the Army's 8th and 57th Transportation Companies, in support of ARVN (Army Vietnam) troops. The CH-21B/CH-21C Shawnee could be armed with 7.62 mm (.308 in) or 12.7 mm (.50 in) door guns. The CH-21 was relatively slow. Its cables and fuel lines were so vulnerable to small arms fire- it was even rumored that a CH-21 had been downed by a Viet Cong spear[citation needed]. The Shawnee was the "Workhorse" of Vietnam until it was replaced with the fielding of the UH-1 Huey, and the later fielding of the CH-47 Chinook in the mid-1960s. The Shawnee had two tandem fully-articulated three-bladed counter-rotating rotors. The CH-21 was powered by one Curtis-Wright R1820-103 Cyclone supercharged 1150 hp piston engine. The CH-21B was equipped with an uprated 1425 shaft horsepower (1063 kW) engine. 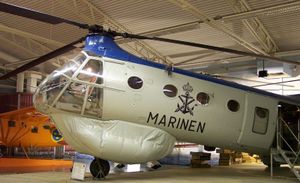 Shawnees in formation over South Vietnam in 1962.