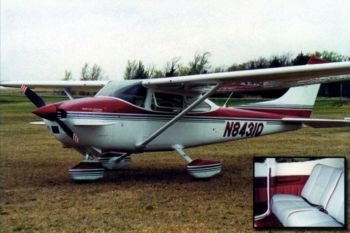 The Peterson 260SE is a STOL conversion of a Cessna 182 airframe made by Todd Peterson. The conversion consists of the addition of a high-lift canard and a 260 hp (194 kW) engine.

The 260SE traces its history to a STOL aircraft called Skyshark built by Jim Robertson in the late 1950s. The Skyshark incorporated a number of novel features, most notably a canard with elevators and rudders in the slipstream behind the propeller. It was a technological success but too expensive to produce. However, Robertson incorporated many features of the Skyshark into the Wren Aircraft Company's Wren 460. The Wren 460 was a conversion of the Cessna 182 airframe that had full-span double-slotted flaps, movable spoilers to assist the ailerons with roll control and a movable high-lift canard. Later models offered a reversible pitch propeller for steeper approaches, and shorter landing runs. The aircraft was marketed as the only safe STOL aircraft. This was because it did not achieve its STOL characteristics through dangerous high angles of attack and by depending on a powerful engine to pull the aircraft upward (operating "behind the envelope"). At full gross weight, the Wren's take-off and landing distances were 300 ft. At idle power the aircraft could loiter at slow speed with outstanding stall resistance and over-the-nose visibility. It could also make steep turns immediately after take-off. Because of the low approach speed, the Wren was approved for landings under Category II conditions (1/4 mile visibility and 100 foot ceilings on Instrument Landing System approaches). The company was seeking approval for landings under conditions of zero visibility shortly before the company went into bankruptcy in the late 1960's.

Todd Peterson acquired the Supplemental Type Certificate for the Wren and produced a number of them in the early 1980's under the designation 460P. He evolved the Wren design into the Peterson 260SE. On the 260SE the wing modifications are absent. The aircraft depends on the high-lift canard and a more-powerful fuel-injected 260 HP Continental engine to achieve STOL capabilities. The additional power and speed modifications permit a cruise speed in excess of 150 knots. A canard-only conversion, the 230SE, is also available for about 1/3 the price of the canard/engine combination. The 230SE has inferior take-off performance compared to the 260SE but both aircraft have a stall speed of 35 knots.