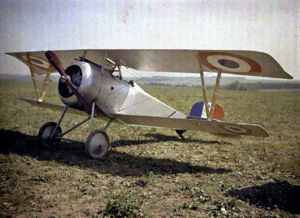 Nieuport is a French aeroplane company famous for racers before World War I (WWI) and fighter aircraft during WWI and between the wars.

Originally formed as Nieuport-Duplex in 1902 for the manufacture of engine components (and for which it developed a good reputation), it was reformed in 1909 as the Societe Generale d'Aero-locomotion, and its products (including ignition components) were marketed to the aviation industry. During this time, their first aircraft were built, starting with a small single-seat monoplane, which was destroyed in a flood. A second design flew before the end of 1909 and had the essential form of the modern aircraft, including a non-lifting tail (where the lifting force pushed it down, as opposed to up as on the Bleriots - a much safer system) and an enclosed fuselage with the pilot fully protected from the elements.

In 1911, the company was reformed specifically to build aircraft (though it continued to build all of the other components including propellers) with the name Nieuport et Deplante. In 1911, Edouard Nieuport (one of several brothers) died after being thrown from his aircraft, and the company was taken over by Henri Deutsch de la Meurthe, a famous supporter of aviation development. With his financing, the name was changed to Societe Anonyme des Establissements Nieuport, and development of the existing designs was continued, though in 1913 and 1914 the company began to lag behind and was setting fewer and fewer records, especially after Charles Nieuport (Brother no. 2) had died in another accident (he stalled and spun in) in 1912, and the position of chief designer was taken over by Franz Schneider, who would later have his next employer, L.V.G., build illegal copies of the (then hopelessly obsolete) Nieuport and have a long-running fight with Anthony Fokker over machine gun interrupter / synchronizer patents.

Gustave Delage and World War I

With Schneider's departure, Gustave Delage (no connection to the Delage automobile company) took over, and major changes occurred immediately. - including updates to the majority of the company's design lineup to bring them up to 1914 standards, and he began on a biplane racer - technically it was a sesquiplane as the lower wing was much smaller than the top. This aircraft wouldn't be ready to fly until after World War I had begun, and initially he had a hard job selling it as the French had already settled on the aircraft they wanted. The British Royal Naval Air Service (R.N.A.S.) was desperate for anything flyable, and bought a batch of what was designated the Nieuport 10, which they found so useful they not only bought a lot more, the French and Russians also started buying them. Its performance was so good that not only were they used as fighters, but also Nieuport came out with an improved development specifically intended as a fighter - the Nieuport 11. In the French designation system, used when it was being trialed, it was considered a type 'B'. Nieuport's own internal designation system also labelled it as a type 'B' (for biplane - there had been a Nieuport 11 monoplane in 1914), with the result that it was written down as the 11 BB - or as pronounced in French - bebe or baby. (Morane Saulnier, another French company, deliberately called one of its aircraft a BB as well.)

Until 1917, most of the companies' aircraft would be successive developments of this one design, with bigger engines, longer wings, and more refined fuselages, but it would reach the end of the road with the Nieuport 27. The basic design lasted so long partly because it combined the advantages of both monoplane (speed) and biplane (strength and visibility) while being supremely maneuverable and suffering no vices. Its climb rate was not to be beaten until 1918, with the arrival of the Fokker D.VII and Junkers D.I 'thick wing' fighters. It had pioneered the concept of concentration of masses long before Sopwith mangled it with their poorly designed Camel (which had center-of-gravity problems caused in part by having the fuel behind the pilot), and its biggest weakness was really in not carrying two Vickers machine guns. With the later higher-powered versions, if put into a long sustained power-on dive, the lower wings could be ripped off; however, this sort of maneuver was rarely required (especially by a skilled pilot) since the Nieuport aircraft could outclimb nearly any opponent.

The next design appeared to be a clean sheet; however, its internal structure was very similar. With much improved aerodynamics, however, it was able to make the leap to the next family from Nieuport's stable. The Nieuport 28 was bypassed by the French as they had already chosen the almost identically performing S.P.A.D. XIII by the time it had flown, and the Nieuport 28 didn't offer enough of an advantage to counterbalance the impact on production. Despite this, a small batch was built for the American United States Army Air Service, which used it until enough S.P.A.D.s were available. In fact, the U.S. Army liked it so much more than the S.P.A.D. that an entire unit mutinied over the change to the S.P.A.D., which they considered to be a 'dog' of an airplane.

By 1918, Nieuport had two derivatives flying, the Nieuport 29 and the Nieuport 31. The 29 was basically a 28 with a wooden monocoque fuselage, a 300-hp Hispano-Suiza engine, and a slightly improved airframe. The 31 was a monoplane that had evolved from the same fuselage as the 28. Specially modified Nieuport 29 and 31 aircraft set speed and height records, and the 31 was the first aircraft to exceed 200 mph in level flight (in the hands of Joseph Sadi-Lecointe).

At this time, Nieuport became Nieuport-Astra, with the absorption of Astra, a company known for aerial balloons, though this name would not be used for long, before becoming Nieuport-Delage, in honour of the work of the chief designer, Gustave Delage, and because he was running the company. Also at this time, Tellier (who built seaplanes) was also absorbed. He continued developing this basic design as the Nieuport-Delage NiD.42/52/62/72, and it would see service during the Spanish Civil War, although by that time it was hopelessly obsolete and was retired before the end of the conflict. Despite this, several French second-line escadrilles were equipped with them during the invasion of France, though it is unlikely they did any flying. Other types were developed; however, the vast majority of these were one-offs, or did not result in significant development.

The end of Nieuport

In 1932, as a result of the forced amalgamations taking place in the French aviation industry, Delage retired and Nieuport-Delage reverted back to Nieuport, albeit only briefly before becoming Liore-Nieuport, then disappearing completely into SNCAO (Societe Nationale de Construction du Sud Ouest) (National South Western Construction Company). Without a skilled chief designer, the company was unable to produce any memorable aircraft and had pretty much disappeared before World War II. SNCAO would eventually be merged into the massive conglomerate known as Aerospatiale; however, the companies' records were destroyed during World War II (WWII), when they were burned to prevent their falling into German hands. This step didn't prevent the Germans from charging several employees with espionage, as the last aircraft to carry the Nieuport name looked remarkably like a Junkers 87 -- albeit as a single-seater with retractable gear.

The Nieuport 11, Nieuport's first purpose-built fighter, ended the Fokker monoplane menace. The Nieuport 11 was powered by the 80-hp Le Rhone 9c rotary engine that was slightly throttleable, from 900 to 1200 rpm. Initially equipped with one non-synchronized, 47-round Lewis machine gun mounted on the top wing, above the propeller arc, it could use its overall superior maneuverability to quickly despatch the Fokker Eindecker, even those armed with twin synchronized Maxim guns.

Two-seat artillery spotting aircraft, also built in United Kingdom by Beardmore. Used until end of war and after as trainer.

The Nieuport 16 was essentially an NIE. 11 airframe powered by the Le Rhone 9J 110-hp engine. Visible differences included a pilot headrest fairing and short side panels ahead of the cockpit, and larger aperture in front of the "horse shoe" cowling. Later versions had a deck-mounted synchronized Vickers gun, but in this configuration the combined effect of the heaver 9J engine and the heavier Vickers gun compromised the maneuverability and made the craft decidedly nose-heavy. This disadvantage was remedied in the next variant, the slightly larger Nieuport 17 C1.

The Nieuport 17 was similar to the earlier Nieuport 11, but had a more powerful engine, larger wings, and a more refined structure in general. First equipped with a 110-hp (82 kW) engine, later upgraded to a 130-hp (97 kW) engine. It had outstanding maneuverability, but the lower wing tended to snap under heavy loads. Widely used during World War I. The Nieuport 21 was also license manufatured in Russia.

The Nieuport 27 was the last and best of the Nieuport "V-strut" aircraft to see service during WWI. Based on the Nieuport 17 and 24 fighters, it incorporated a large plywood vertical tail and a redesigned, rounded horizontal tail to improve stability.

The Nieuport 28 was the first single-seat biplane fighter used by the United States Army Air Service in WWI. It was more maneuverable than the sturdier SPAD S.XIII that replaced it, but also had a reputation for fragility and a tendency to shed its upper wing fabric in a dive.

Single-seat biplane fighter that entered service as World War I ended, used by France, Japan, Spain, Sweden, Thailand, Argentina, Italy, and others. One example was flown by Lindberg for lengthy aerobatic display for Paris crowds after crossing Atlantic.

Last Nieuport to see operational service, lack of air superiority resulted in these attack aircraft largely being shot down.