The McDonnell Douglas MD-80 and MD-90 are twin-engine, single-aisle jet commercial aircraft derived from the DC-9. The MD-80 was introduced in 1980 and was followed in modified forms by the MD-90 in 1989 and Boeing 717 in 1998. The 717 was originally named the MD-95, but was renamed after the McDonnell Douglas—Boeing merger. As of May 23, 2006, with the final two deliveries of the Boeing 717, production of the DC-9 aircraft family ceased after 41 years.

Douglas Aircraft developed the DC-9 in the 1960s as a short-range companion to their larger DC-8. The DC-9 was an all-new design, using two rear fuselage-mounted turbofan engines, and a T-tail. The DC-9 aircraft have distinctive 5-abreast seating and holds 80 to 135 passengers depending on seating arrangement and aircraft version.

The DC-9 family is one of the most successful jet airliners with total sales of over 2,400 units; it ranks third behind the second place Airbus A320 family with 3,000 total sales, and the first place Boeing 737 with over 6,000 total sales. 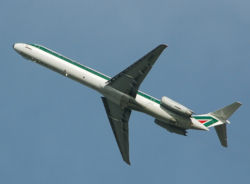 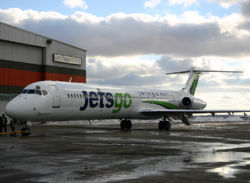 The MD-80 series is a mid-size, medium-range airliner that was introduced in 1980. The design was second generation of the DC-9 with two rear fuselage-mounted turbofan engines, small, highly efficient wings, and a T-tail. The aircraft has a distinctive 5-abreast seating in coach class. It was a lengthened DC-9-50 with a higher maximum take-off weight (MTOW) and the ability to carry more fuel. The airplane series was designed for frequent, short-haul flights for 130 to 172 passengers depending on plane version and seating arrangement. Originally it was designated DC-9-80 and marketed as the "DC-9 Super 80". That was changed to MD-80 before the initial launch as a marketing move to show that McDonnell Douglas had a new airliner for the 1980s.

The MD-80 series entered service in 1980. It was typically known as the "MD-80" or "Super 80". The versions of the series were the MD-81/82/83/88 and the shortened MD-87. The MD-80 versions have cockpit, avionics and aerodynamic upgrades along with the more powerful, efficient and quieter JT8D-200 series engines, which are a significant upgrade over the smaller JT8D-15, -17, -11, and -9 series. The MD-80 series aircraft also have longer fuselages than their earlier DC-9 counterparts, as well as longer range. The MD-80's production ended in 1999. Notably, launch customers American Airlines and Alitalia still, as of 2006, refer to the planes in fleet documentation as "Super 80" or "SP80". This model is still flown extensively by American Airlines and Delta Air Lines on domestic routes.

The MD-90 is a mid-size, medium-range airliner that was developed from the MD-80 series. It was a 5 feet longer, updated version of the MD-88 with a similar electronic flight instrument system (EFIS), (glass cockpit) and even more powerful, quieter and fuel efficient IAE V2500 engines. The MD-90 features seating for 153 to 172 passengers depending on seating arrangement.

MD-90 production ended in 2001 due to internal competition with Boeing's own 737-800 after Boeing and McDonnell Douglas merged in 1997. The final 20 MD-90s were built under contract in China under the Trunkliner program.[1][2] The MD-90 is the least successful member of the DC-9 family with 117 planes sold.

The shortened MD-95 was developed to satisfy the market need of a replacement for early DC-9 models, then approaching 30 years old. The project was a complete overhaul of the system, going back to the original DC-9 and reinventing it for modern transport. The aircraft is 1.45 m longer than the DC-9-30 and is powered by new Rolls-Royce BR715 engines. It has a six screen flat panel liquid crystal display showing the primary flight display, navigation display, and multi-mode engine & systems display.