The Vought F8U-3 Crusader III was an aircraft developed by Chance Vought as a successor to the successful F-8 Crusader program and as a competitor to the F-4 Phantom II.[1] Though based in spirit on the F-8 (then known as the F8U-1 and F8U-2) and sharing the older aircraft’s designation in the old Navy system, the two aircraft had little in common.[1]

In parallel with the F8U-1s and -2s, the Crusader design team was also working on a larger aircraft with ever greater performance, internally designated as the V-401. Although externally similar to the Crusader and sharing with it such design elements as the variable incidence wing, the new fighter was larger and was powered by the Pratt & Whitney J75-P-5A engine generating 29,500 lbf (131 kN) of afterburning thrust. To deal with Mach 2+ flight conditions it was fitted with large vertical ventral fins under the tail which rotated to the horizontal position for landing. To ensure sufficient performance, Vought made provisions for a Rocketdyne XLF-40 liquid-fueled rocket motor with 8,000 lbf (35.6 kN) of thrust in addition to the turbojet. Avionics included the AN/AWG-7 fire control computer, AN/APG-74 radar, and AN/ASQ-19 datalink. The system was expected to simultaneously track six and fire at two targets.

Due to extensive changes as compared to the F8U-1, the F8U-2 was labeled by some as the "Crusader II," and as a result, the F8U-3 was officially labeled "Crusader III."[2] 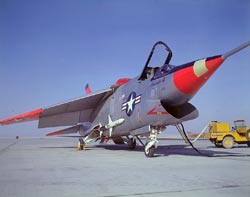 A view of the F8U-3’s chin inlet shows it to be drastically different from its predecessor, the F-8 Crusader.

The F8U-3 first flew on June 2, 1958. During testing, the aircraft reached Mach 2.6 at 35,000 ft (10,670 m). With Vought projecting a top speed of Mach 2.9, the Navy designated the project F8U-3 and in December of 1955 declared a competition for a Mach 2+ fleet defense interceptor. Fly-offs against the Crusader III’s main competitor, the future F-4 Phantom II, demonstrated that the Vought design had a definite advantage in maneuverability. However, the solitary pilot in the F8U-3 was easily overwhelmed with the workload required to fly the intercept and fire Sparrows which required constant radar illumination from the firing aircraft, while the Phantom II had a dedicated radar intercept officer on-board.[1] In addition, with the perception that the age of the guns was over, the Phantom’s considerably larger payload and the ability to perform air-to-ground as well as air-to-air missions, trumped Vought’s fast but single-purposed fighter.

The F8U-3 program was canceled with five aircraft built. Three aircraft flew during the test program, and were transferred to NASA for atmospheric testing, as the Crusader III was capable of flying above 95% of the Earth’s atmosphere.[1] NASA pilots flying at NAS Patuxent River routinely intercepted and defeated U.S. Navy Phantom IIs in mock dogfights, until complaints from the Navy put an end to the harassment.[1]

All of the Crusader IIIs were later scrapped.

Data from The Great Book of Fighters[3], American Fighter Aircraft[4], and MiG Master[1] 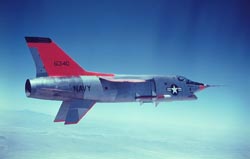