The Vought F7U Cutlass (Vought V-346A Cutlass) was a United States Navy carrier-based jet fighter and fighter-bomber of the early Cold War. It was a highly unusual, semi-tailless[1] design, based on aerodynamic data captured from the German Arado company at the end of World War II. The Cutlass had broad, swept wings, with twin tail fins mounted on them. Pitch and roll control was provided by elevons. The very long nosewheel strut was rather weak, and a collapse could seriously jeopardize the pilot. The F7U was also largely betrayed by its anemic Westinghouse turbojet, an engine which some pilots wryly observed put out less heat than the same company's toasters. Its carrier handling was notoriously poor. The J35 was actually known to flameout in the rain, a very serious fault.

Three prototypes were ordered in 1946, with the first example flying on September 29 1948, piloted by a Robert Baker. Production orders were placed for the F7U-1 in a specification very close to the prototypes, and F7U-2 and F7U-3 versions with more powerful engines. Because of development problems with the powerplant, however, the F7U-2 would never be built, while the F7U-3 would incorporate many refinements suggested by tests of the -1. The first 16 F7U-3 had non-afterburning Allison J35-29 engines. The -3 with its Westinghouse J46-WE-8B turbojets would eventually become the definitive production version, with 288 aircraft equipping 13 US Navy and Marine squadrons. Further development stopped once the F8U Crusader flew.

The Blue Angels Navy aerobatics team flew several F7U Cutlass as a side act during their 1952 show season in an effort to promote the new aircraft, but did not use them as part of their regular formation act. Both the pilots and ground crews found the aircraft generally unsatisfactory. 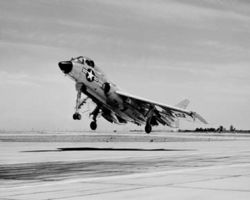 Data from Jane's Encyclopedia of Aviation[2]