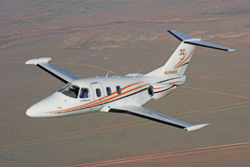 The Eclipse 500 is a small, six seat business jet aircraft manufactured by Eclipse Aviation. It is the second of a new class of business jets known as the Very Light Jet (VLJ, previously called 'Microjets'), following the delivery of the first VLJ, the Cessna Citation Mustang in late 2006.[1] The plane is powered by two lightweight Pratt & Whitney Canada PW610F turbofan engines in tail-mounted nacelles.

The production Eclipse 500 is the product of a conceptual design evolution which began with the Williams V-Jet II, which was designed and built by Burt Rutan's Scaled Composites in 1997 for Williams International to be used as a testbed and demonstrator for their new FJX-2 turbofan engine. The aircraft and engine were debuted at the 1997 Oshkosh Airshow.

The V-Jet II was an all-composite structure with a forward-swept wing, a V-tail, each fin of which was mounted on the nacelle of the one of the two engines. Williams had not intended to produce the aircraft, but it attracted a lot of attention, and Eclipse Aviation was founded in 1998 to further develop and produce the aircraft.

The prototype and only V-Jet II aircraft was obtained by Eclipse Aviation along with the program, and was donated to the Experimental Aircraft Association AirVenture museum in Oshkosh, Wisconsin in 2001.

Eclipse CEO Vern Raburn was one of the first business executives at Microsoft. Subsequently, Bill Gates became a major stake-holder in the Eclipse project. The VLJ concept has been pursued by a number of manufacturers, and because the V-Jet II had been designed around one of the primary VLJ engines, Eclipse believed it was an ideal design to refine and market.

The airframe was significantly redesigned as an all-metal structure with a T-tail and straight wings. The main cabin shape is essentially all that was retained from the V-Jet II. It was recognized that for an aluminum structure to be cost effective, new manufacturing techniques would have to be developed. One of the primary processes specifically developed and patented for this project was friction stir welding, in which the skin and underlying aluminum structure are welded together rather than riveted, as traditional for aluminum aircraft. Anti-corrosion bonding techniques were also developed.[2]

Besides materials processes, the general process of building the airframe was redesigned, with techniques taken from the automotive industry. Traditionally, aircraft structure is mounted in a jig, and the skin is riveted on to the outside of it. For the Eclipse 500, lessons were taken from composite airframe manufacturing, and the aluminum skin is first laid in a mold, and then the structure is built into it. The result is much more precise control of the aircraft's final shape, resulting in a cabin that is more robust and can be pressurized to a higher differential. In addition, the manufacturing techniques are designed so that one crew can assemble an airframe in a single shift. The complete interior is designed to be installed on a moving assembly line in 45 minutes.

The cockpit was designed to utilize glass cockpit technology. Originally, it was planned to incorporate an Avidyne AVIO Avionics system, which integrates virtually all of the aircraft electronics. Eclipse CEO Vern Raburn, complaining about delays for its type-certification said that Cessna did a "much better job of picking vendors" for its VLJ, especially Garmin, which provides the Garmin G1000 integrated avionics system for the Cessna Citation Mustang. Raburn said that if he "had to choose an avionics supplier today for the Eclipse 500, we’d certainly have to go with Garmin and its G1000."[3]. In February 2007 it was announced that Avidyne would not deliver any product for the Eclipse 500. [4] Shortly after it's announcement to part with Avidyne, Eclipse published an announcement that described the Next Generation Avio System and it's suppliers. Companies included Innovative Solutions & Support, Inc. (IS&S), Chelton Flight Systems, Garmin International, Honeywell, and PS Engineering, Inc. IS&S will provide the bulk of the package, including the PFD and MFD displays and the software included with them. Chelton is producing the flight management system, Garmin with the transponders, Honeywell with the navigation equipment, and PS Engineering with the audio system.[5]

The prototype Eclipse 500 initially was designed with a pair of Williams EJ-2 engines (production variant of the FJ22/FJX-2), but performance was not satisfactory. Pratt & Whitney Canada agreed to participate in the project, and modified the design of their PW615 engine, designating it the Pratt & Whitney Canada PW610F. The prototype first flew in 2002. The redesign to incorporate the new engines resulted in a significant delay to the development program.

As a result, the aircraft is now being called the quietest jet in history.[6]

The Eclipse 500 received provisional type certification from the FAA on July 27, 2006, shortly after the aircraft's PW610F engine was certified by the Canadian authorities. FAA Administrator Marion Blakey presented Raburn with the provisional certificate in a special ceremony at the 2006 Oshkosh Airshow.

Full certification was not granted at that time because the composite wing tip fuel tanks did not meet FAA lightning strike criteria. As a result, Eclipse started testing an improved wingtip fuel tank made from aluminium. Eclipse also started ramping up production of the 500, so aircraft could be released to customers once full certification was achieved.

Full type certification was eventually achieved on 30 September, 2006. At that point, in addition to the five flying prototypes, 23 aircraft were in production and two had already been completed. Full certification allows the 500 to be flown using IFR (instrument flight rules) with a single pilot throughout its operating envelope. Deliveries to customers can now start. However, some avionics functionality (e.g. GPS navigation, weather radar, etc) will not be available until some 6-12 months after the initial deliveries and will have to be retro-fitted into in-service aircraft.

Eclipse also has not yet received its FAA production certificate. This caused a delay in the delivery of its first plane. [7] Until the production certificate is granted, each airplane that rolls off the line must be individually inspected and certified airworthy by the FAA. On March 1, 2007, the Aero-News Network reprinted a letter that CEO Vern Raburn sent to Eclipse's potential customers notifying them that his company was continuing to experience production schedule delays. He provided a list of some eight separate excuses why his company was failing to deliver. He also announced, "While it is impossible to predict the exact timing for the receipt of our Production Certificate (PC), we will keep you informed of our progress."[8]

During development of the 500 it became apparent that a higher than anticipated drag level would reduce the range and cruise speed. As a result Eclipse started to study a number of modifications which might improve the situation. In early December 2006, Eclipse announced, in a letter, a package of improvements, including:

Together, these measures are expected to increase the cruise speed from 360 to 370kts TAS and increase NBAA IFR range from 1055 to 1125nm. All aircraft, including initial deliveries, will be upgraded to this new standard.[citation needed]

Eclipse has recently demonstrated 372kts TAS and a maximum NBAA IFR range of 1156nm as a result of "production quality", performance enhancements to the airframe. These modifications will be incorporated into the "B model" production standard.[citation needed]

From the beginning, the aircraft was intended to bring a new economy to small jet aircraft, and both cost of acquisition and ongoing operational costs were considered in the design of the plane. Eclipse is attempting to market the aircraft to a segment of general aviation that has not had a jet participating in the market, so it is directly competing with high-end piston and turboprop aircraft. Thus, Eclipse's marketing efforts are focusing on the plane's very low service costs and comprehensive maintenance and support program for customers. Being able to land at over 10,000 airports in the United States, Eclipse and other VLJ manufacturers hope that this would proliferate an air taxi role for their aircraft.

Eclipse is reporting over 2,500 orders on the books. The company initially advised customers and investors that they hoped to deliver 10 aircraft by the end of 2006[9], but as of March 2, 2006, Eclipse was still unable to obtain a production certificate, nor where they able to deliver even their second aircraft. The Eclipse has an initial cost of around 1.52 million USD, far lower than its competitors. For comparison, the Cessna Citation Mustang, that company's entry into the VLJ market, is projected to cost around 2.62 million USD at launch in 2006. By 2008 Eclipse plans on making four aircraft a day.

Low operating costs are also a focus of the Eclipse 500. Eclipse will offer the Jet Complete program, guaranteeing private owners a maintenance cost of $209 per flight hour for three years (if the aircraft is operated between 300 and 3,000 hours during that period). A similar Jet Complete Business program will cover charter operators.

DayJet will initially be Eclipse's largest customer, with around 250 aircraft operating in an "air taxi" role. Aviation analysts remain somewhat doubtful whether the company's aggressive sales and production targets will be feasible.[10]

Although Raburn told customers in late November of 2006 that he anticipated delivering 10 aircraft before the end of the year, his company was only able to get a single copy of its jet delivered on December 31, 2006.[9] The official delivery ceremony occurred on January 4, 2007, when the keys were handed over to its owners, David Crowe, an owner-pilot and the shared-jet cooperative group, Jet Alliance.[11]

A New York Times article from August 29, 2006 posed the question, "Will having a lavatory on board be the key factor in short flight success?"[12] A July, 2006 NBC Nightly News with Brian Williams broadcast also discussed the issue of the Eclipse 500's lack of an on board toilet.[13] Passengers needing to relieve themselves on the Eclipse 500 will be required to bring along a portable container. Eclipse Aviation's CEO Vern Raburn suggests that most of his company's customers will be using the VLJ for short flights from 300-500 miles in length in 40-80 minutes and that the lavatory issue is not going to be a problem for VLJ customers.[12]

Rick Adam, CEO of Adam Aircraft Industries, disagrees and says, "people are not going to get on a plane without a bathroom, at least they are not going to do it more than once". However, the new air taxi service companies, which make up the bulk of the Eclipse 500 orders, have done surveys that show that having a toilet is not a concern for most of their passengers. The CEO of DayJet says that even if his company outgrows the Eclipse 500 in the future, he will also have his company's larger planes configured without a toilet.[13]