The EA-6B Prowler is a twin-engine, mid-wing aircraft manufactured by Northrop Grumman Aerospace Corporation as a modification of the basic A-6 Intruder airframe.

Designed for carrier and advanced base operations, the Prowler is a fully integrated electronic warfare system combining long-range, all-weather capabilities with advanced electronic countermeasures. A forward equipment bay and pod-shaped faring on the vertical fin house the additional avionics equipment. It is the United States Navy's and the United States Marine Corps's primary electronic warfare aircraft. The primary mission of the aircraft is to support strike aircraft and ground troops by interrupting enemy electronic activity and obtaining tactical electronic intelligence within a combat area.

Since the retirement of the EF-111A Raven in 1995, it is one of the primary aerial radar jammers in the DOD arsenal. It has been utilized in practically every US combat operation and is frequently flown in support of the US Air Force. The increased usage has shortened the airframes' lifetimes and the USN's aircraft are slated to be replaced by the EA-18G Growler.

The Prowler has a crew of four, a pilot and three Electronic Counter-measures Officers (known as ECMOs). Powered by two non-afterburning Pratt & Whitney J52-P408 turbojet engines, it is capable of speeds of up to 950 km/h with a range of 1,840 kilometers. Since EW operations are very demanding, the Prowler is a high-maintenance aircraft and also undergoes more frequent equipment upgrades than any other aircraft in the Navy.

Design particulars include the refueling probe being asymmetrical, appearing bent to the right; it contains an antenna near its root. The canopy has a shading of gold not for sunlight but to protect the crew against the radio emissions that the electronic warfare equipment produces. 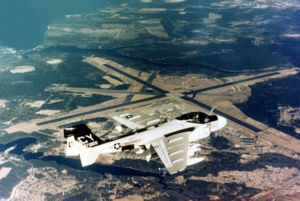 Although designed as an electronic escort and command and control platform for strike missions, the EA-6B is also capable of attacking surface targets on its own, especially radars, SAM launchers, and other enemy defenses. The AGM-88 HARM (High-speed Anti-Radiation Missile) is the main offensive strike weapon of the Prowler. In addition, the aircraft is highly capable of conducting electronic intelligence (ELINT) collection.

An earlier EA-6A "Electric Intruder" was developed during the Vietnam War. Basically a straightforward conversion of the standard two-seat A-6 airframe fitted with EW equipment, it was essentially an interim aircraft used only by a few USMC squadrons.

The much more advanced and substantially redesigned EA-6B first flew on May 25, 1968 and entered service with VAQ-132 'Scorpions' in July 1971. The first combat mission of the EA-6B was flown in Vietnam by Commander Everett F. "Rosie" Rollins, the squadron commanding officer.[citation needed] The squadron deployed in April of 1972 and returned in April of 1973. 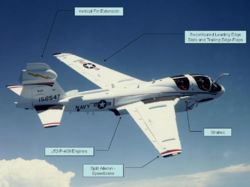 The Advanced Capability EA-6B Prowler (ADVCAP) was a development program initiated to improve the flying qualities of the EA-6B and to upgrade the avionics and electronic warfare systems. The intention was to modify all EA-6B's into the ADVCAP configuration, however the program was removed from the Fiscal Year 1995 budget due to financial pressure from competing Department of Defense acquisition programs.

The ADVCAP development program was initiated in the late 1980's and was broken into to three distinct phases: Full-Scale Development (FSD), Vehicle Enhancement Program (VEP) and the Avionics Improvement Program (AIP).

The added modifications increased the aircraft gross weight approximately 2000 lb (900 kg) and shifted the center of gravity 3% MAC aft of the baseline EA-6B. When operating at sustained high angles-of-attack, fuel migration would cause additional shifts in CG with the result that the aircraft had slightly negative longitudinal static stability. Results of flight tests of the new configuration showed greatly improved flying qualities and the rearward shift of the CG had minimal impact.

The AIP prototype (bureau number 158547) represented the final ADVCAP configuration, incorporating all of the FSD and VEP modifications plus a completely new avionics suite which added multi-function displays to all crew positions, a head-up display for the pilot, and dual GPS/INS naviagtion systems. The initial joint test phase between the contractor and the US Navy test pilots completed successfully with few deficiencies. 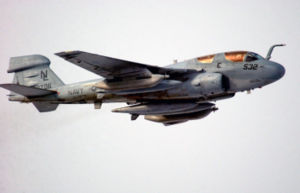 EA-6B Prowler takes off from Eielson AFB. Note the distinctive tint on the canopy.

About 125 Prowlers remain today, divided between 12 Navy, 4 Marine, and 3 joint Navy-Air Force "Expeditionary" squadrons. A JCS staff study recommended that the EF-111 Raven be retired to reduce Type/Model/Series aircraft dedicated to the same mission, which led to an OSD Program Decision Memorandum (PDM) to establish 3 "expeditionary" Prowler squadrons composed of Navy and USAF personnel to meet the needs of the Air Force. The Prowler is unaffectionately known as the "Queer", a nickname derived from the "Q" in Prowler squadrons' "VAQ" designation as opposed to the A-6 Intruder squadrons' "VA" designation, thus making the Prowler a "Queer A-6."

Though it remains in service today, the Navy EA-6B Prowler community is slated to be begin transitioning in 2009 to the EA-18G Growler, a new electronic warfareAirborne Electronic Attack] derivative of the F/A-18F Super Hornet. All but one active duty Navy EA-6B squadrons are based at Naval Air Station (NAS) Whidbey Island, located in the northwest corner of the state of Washington. VAQ-136 is stationed at Naval Air Facility Atsugi, Japan, as part of Carrier Air Wing 5, the forward deployed air wing that deploys aboard USS Kitty Hawk and VAQ-209, a Navy Reserve squadron, is stationed at NAF Washington, DC. Marine EA-6B squadrons are located at Cherry Point, North Carolina. 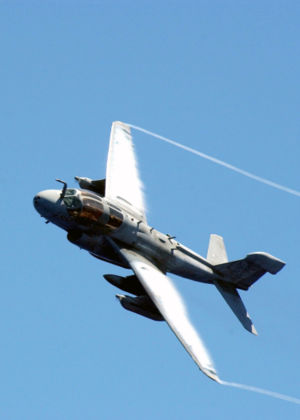 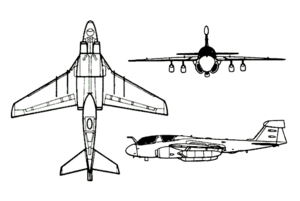 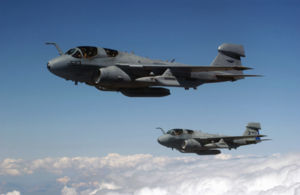 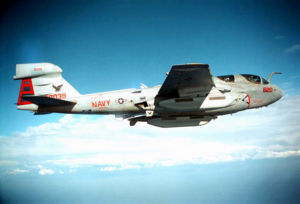 An EA-6B patrols the skies over Bosnia and Herzegovina, 1995.

Data from US Navy Fact File[1]