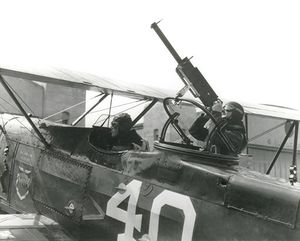 A number of biplanes built by Curtiss were named "Falcon", most under the US Army Air Corps designation O-1. They first appeared in 1924. The Curtiss Falcon fight at the Constitutional Revolution of 1932, in Brazil, used by the forces of São Paulo.

The plane was a conventional unequal-span design with wooden wings, while the fuselage was built using aluminum tubing. The tail included a balanced rudder, and the landing gear was fixed, with a rear skid originally, later changed to a tail wheel.

It was reasonably successful as an observation plane, flown primarily by the 1st, 5th, and 99th Observation Squadrons of the 9th Observation Group, Mitchel Field, New York. The A-3 Attack Falcon variant saw considerable use, in front line service with the 8th, 13th, and 19th Attack Squadrons of the 3rd Attack Group, Barksdale Field, Louisiana, and the 26th Attack Squadron in Hawaii from 1928 to 1934 and with reserve units until 1937.