The CH-53 Sea Stallion is the most common name for the Sikorsky S-65 family of heavy-lift transport helicopters. Originally developed for use by the United States Marine Corps, it is also in service with Germany, Iran, Israel, Mexico, and as the MH-53 Pave Low with the United States Air Force. The USAF also operated the HH-53 "Super Jolly Green Giant" during the late- and post-Vietnam War era.

The dimensionally-similar CH-53E Super Stallion is a heavier-lifting, improved version designated S-80E by Sikorsky. Its third engine makes it more powerful than the Sea Stallion, which it has replaced in the heavy-lift mission.

In 1960, the US Marine Corps began to seek a replacement for their old S-56 piston-powered helicopters, originally working with the other three U.S. armed services on the "Tri-Service VTOL transport", which would eventually emerge as the Vought-Hiller-Ryan XC-142A tilt-wing. The design became more elaborate and the program stretched out resulting in Marines deciding they couldn't get a workable machine in a satisfactory timeframe and dropped out. This was just as well, because the XC-142A, although a very innovative and capable machine, would never enter production.[1]

In March 1962, the US Navy Bureau of Weapons, acting on behalf of the Marines, issued a request for a "Heavy Helicopter Experimental / HH(X)". The specifications dictated a load capability of 8,000 pounds (3,630 kilograms) with an operational radius of 100 NM (185 km) at a speed of 150 kt (278 km/h). The HH(X) was to be used in the assault transport, aircraft recovery, personnel transport, and medical evacuation roles. In the assault transport role, it was to be mostly used to haul heavy equipment instead of troops.[1]

In response, Boeing Vertol offered a modified version of the Chinook; Kaman offered a development of the British Fairey Rotodyne compound helicopter; and Sikorsky offered what amounted to a scaled-up version of the S-61R, with twin GE T64 turboshafts and the dynamic system of the S-64, to be designated the "S-65". Kaman's proposal quickly died when the British government dropped its backing of the Rotodyne program. Competition between Boeing Vertol and Sikorsky was intense, with the Boeing Vertol having something of an edge because the type was being acquired by the U.S. Army. Sikorsky threw everything into the contest and was awarded the contract in July 1962.[1]

The Marines originally wanted to buy four prototypes but ran into funding problems. Sikorsky, determined to keep the deal, cut their estimate for development costs and said that the program could be done with two prototypes. The military bought off on the proposal, and in September 1962 Sikorsky was awarded a contract for a little under US$10 million for two "YCH-53A" prototypes, as well as a mockup and a ground-test airframe.[1]

The development program did not go entirely smoothly, due to a shortage of engineering resources plus various failures of subcontractors and the government, but these problems were gradually overcome. There was also the problem that U.S. Defense Secretary Robert S. McNamara was pushing "commonality" between the armed services and pressuring the Marines to obtain the Chinook anyway, but the Marines managed to convince McNamara's people that the Chinook couldn't meet requirements without a lot of expensive changes.[1]

All these obstacles overcome, the first YCH-53A performed its initial flight at the Sikorsky plant in Stratford, Connecticut, on October 14, 1964, about four months behind schedule. The Marines had already placed an initial production contract for 16 helicopters in September. Flight trials went more smoothly than expected, helping make up for the lost time in development. It received the military designation and name "CH-53A Sea Stallion".[1] Delivery of production CH-53s began in 1966.[2]

The CH-53A arrived in Vietnam in January 1967 and proved useful, eventually recovering even more downed aircraft than the CH-54. A total of 141 CH-53As were built, including the two prototypes.[1] The US Navy acquired 15 CH-53As from the USMC in 1971 for airborne mine countermeasures (AMCM) activities. The helicopters had more powerful T64-GE-413 turboshafts installed and the received the designation "RH-53A".[1]

The USAF ordered the HH-53B in September 1966 and first flew on March 15, 1967. It added a refueling probe, drop fuel tanks and a rescue hoist and featured upgraded T64-GE-3 engines. The Air Force used the HH-53B for combat search and rescue (CSAR).[3] HH-53C was an improved CSAR variant with a smaller 450 US gallon (1,705 liter) for improved performance. It also added more armor and better communication systems. The CH-53C was similar except it lacked a refueling probe. It was used by the USAF for more general transport work.[4]

Heavy lifting in tropical climates demanded more power so the Marines decided to acquire an improved variant, the "CH-53D", with uprated engines, originally the T64-GE-412 then later the T64-GE-413. The CH-53D also included an uprated transmission to go with the more powerful engines, and a revised interior to permit a load of 55 troops.[1]

File:Sideview of an HH-53 helicopter, 1972.jpg
A HH-53 of the 40th Aerospace Rescue and Recovery Squadron as seen from the gunner's position in a helicopter of the 21st Special Operations Squadron, Vietnam, 1972.

The initial flight of the CH-53D was on January 27, 1969. The CH-53D served alongside the CH-53A through the rest of the Vietnam War. A VIP transport version designated, "VH-53D" with plush accommodations was used by the Marines for the US presidential flights.[1] The US Navy also acquired CH-53D based helicopters for mine sweeping. These were designated "RH-53D" and included mine sweeping gear such as a pair of Browning 0.50 in (12.7 mm) machine guns for detonating mines. The Navy received 30 RH-53Ds beginning in 1973. After the RH-53Ds were in service, the RH-53As were handed back to the Marines and restored to CH-53A configuration.[1]

During the 1980s, Israeli Air Force's CH-53 Yas'ur fleet was upgraded and improved by Israel Aircraft Industries, along with military high-tech firm Elbit Systems. The project – which ended only in 1997 – improved the CH-53 avionics, robustness and extended its life span by at least two decades.

In 1989, some of the CH-53As being retired by the Marines were passed on to the U.S. Air Force for training, with these helicopters redesignated "TH-53As". The TH-53As were stripped of most operational equipment and painted in USAF camouflage colors.[1]

The Sea Stallion has a fuselage design similar to the Sikorsky S-61R/Jolly Green Giant series. It has a passenger door on the right side of the fuselage behind the cockpit and a power-operated rear loading ramp. The fuselage was watertight, though not intended for amphibious use, and only landed on water in emergencies. The Stallion has mechanical flight controls which are backed by two independent hydraulic systems. Armor protects crew and vital systems.[1]

Later production CH-53Ds featured a Blade Inspection Method (BIM) scheme to detect cracks in its metal rotors. BIM involved pressurizing the interior of the rotor blades. If a crack is present pressure is lost and a red indicator on the rotor blade tip was tripped. Later, the BIM system was connected to a cockpit display. BIM reduced the need to swap out rotor blades on a routine basis.[1] 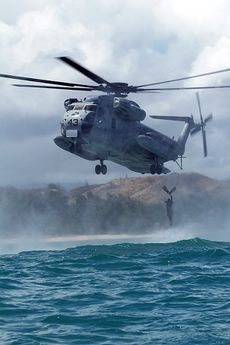 A CH-53 performing a helocast insertion during training off Hawaii

The CH-53/HH-53 has much combat experience during its lengthy service, with the U.S. military during the Vietnam War and as a Special Operations helicopter, and the Israeli Air Force.

The CH-53D served alongside the CH-53A through the rest of the Vietnam War, with both types performing a final service at the end of the conflict in performing evacuations of personnel from Saigon and Phnom Pehn.[1]

U.S. Air Force HH-53 Super Jollies were the primary search-and-rescue helicopter in Southeast Asia between 1967 and 1975, inserted the Operation Ivory Coast rescue team into the North Vietnamese prison camp at Son Tay in 1970, and carried the Marines who attempted to rescue the crew of the SS Mayaguez. Marine-flown Navy Sea Stallions were the rotary-wing element of Operation Eagle Claw, the attempted rescue of American hostages in Iran in 1980 that ended in disaster and embarrassment at "Desert One".

The CH-53D is due to return to the middle east in support of OIF. It will be performing the combat roles that the MV-22 is not able to conduct at this time.[citation needed]

CH-53 helicopters joined the Israeli Air Force in August 1968 and were given the Hebrew name Yas'ur (Petrel). They are the main cargo helicopters of the IAF, carrying troops and heavy equipment.

In 1969, during the War of Attrition, IAF Yas'ur CH-53s landed in Egypt and conveyed a captured Soviet advanced radar system back to Israel for examination by Israeli scientists and engineers (see Operation Rooster 53).[7] In the 1973 Yom Kippur War, the Yas'urs moved artillery batteries around the fronts, evacuated wounded soldiers and rescued pilots from behind enemy lines. In one engagement, a Yas'ur was damaged by cannon fire from a MiG-21 but returned safely to base. Since 1973, Yas'urs have also been used by the IDF to land and extract Sayeret commandos on deep raids into Lebanon and Syria.

In 1989, Yas'urs were used to fight a huge blaze on Mount Carmel. They performed dozens of low flyovers into the smoke and flames, dumped 700 tons of water on the fire, and doused it.

RH-53D
United States Navy mine countermeasures version of the CH-53D, fitted with 0.50 in guns and provision for air refueling, 30 built for the USN and six for Imperial Iranian Navy Aviation (since 1979, the Islamic Republic of Iran Navy Aviation).

CH-53D Yas'ur 2000
CH-53D upgraded and improved by the Israel Aircraft Industries to extend life span past 2000.

VH-53F
Six unbuilt VIP helicopters for the US Navy/Marine Corps.

File:DF-SD-04-05718.jpg
CH-53G of the German Army Aviators Corps during an exercise in Bosnia

CH-53G
German base version of the CH-53D for German Army Aviators Corps. A total of 112 were produced including 2 pre-production and 20 assembled by VFW-Fokker and 90 built by Sprey.[8] As of 2007, 89 German CH-53s were in service, with 80 planned to be in service in 2014. All German CH-53s are going to receive T64-100 engines (in 3 batches, 1st batch has already been installed, 2nd batch is currently being installed and 3rd batch is planned with funding made available). All will receive IFR-capability.[citation needed]

CH-53GS
Update of 20 CH-53Gs with additional missile counter measure, upgraded communication and navigation system and two external fuel tanks in late 1990s.[8] They later received the first batch of T64-100 engines to operate in hot&high conditions as they prevail in Afghanistan as well as MG3 and M3M machine guns.[citation needed]

CH-53GSX
A further update of six CH-53Gs with modern electronics, two external fuel tanks, counter measures and dust filters for the engines, particularly ordered for the deployment in Afghanistan starting in 2009.[9]

CH-53GA
Update of further 40 CH-53Gs with new flight deck, new flight control system, autopilot, navigation and communication systems, FLIR, ECM and missile counter measures as well as provisions for additional internal fuel tanks. The upgrade is to be completed in 2013.[1] 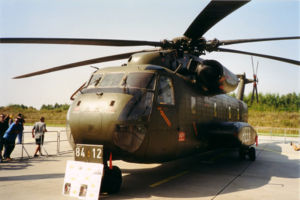 Due to its large size and troop capacity, aerial accidents that involve CH-53 helicopters were some of the deadliest helicopter accidents ever.

File:DM-ST-84-02421.jpg
A CH-53 from HMH-462 rests on a landing mat at a mountain-top fire support base. The base is under construction by members of the 3rd Marine Division.