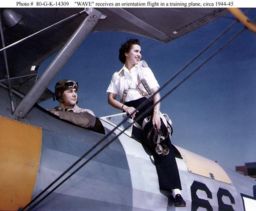 WAVE in a Boeing Stearman N2S US Navy training aircraft.

The Stearman model 75, widely known as the Stearman, Boeing Stearman (Stearman became a subsidiary of Boeing in 1934) or Kaydet is a biplane, of which 8584 were built in the United States during the 1930's and 40's as a military trainer aircraft. It served as the basic trainer for the USAAF (as the Kaydet) and USN (as the N2S) throughout World War II and after the conflict was over, thousands of surplus aircraft were sold on the civil market. In the immediate post-war years they became popular as crop dusters and as sports planes.

The Kaydet was of rugged construction, and conventional biplane design with large, fixed tailwheel undercarriage, and accommodation for the student and instructor in open cockpits in tandem. The radial engine was usually uncowled, although some Stearman operators choose to cowl the engine, most notably the Red Baron Stearman Squadron.

This aircraft article has not been updated to WikiProject Aircraft's current standards. Please see this page for more details.
Retrieved from "https://plane.spottingworld.com/wiki/index.php?title=Boeing-Stearman_Model_75&oldid=5387"
Categories: