The Ansat is a Russian light multipurpose helicopter manufactured by Kazan Helicopters. 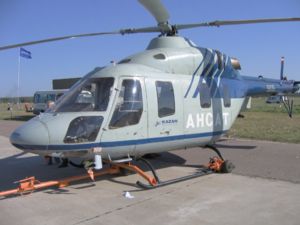 Kazan Helicopters in Kazan has been one of main Russian manufacturers of helicopters of Mikhail Mil bureau design. In 1990s, the management realized, that there would be need for light helicopters in Russia, as the fleet of standard Mi-2 was getting older, and design itself became obsolete. The Mi-2 was the lightest helicopter mass-used in the former USSR, despite it was twice bigger, than light Western helicopters. First Kazan Helicopters wanted to develop a helicopter basing on the AS 350 Ecureuil in cooperation with Eurocopter, but it failed. 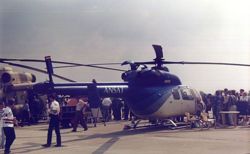 As a result, in 1993 Kazan Helicopters organized its own design bureau, in order to create a new helicopter (the bureau was officially certified by the Russian authorities in January 1997). The helicopter was named Ansat (meaning "light" in Tatar language). Since there were no proper Russian engines available, the designers decided to use Western ones. In 1998, the first prototype for ground static tests was completed. The second prototype (no. 02, then 902) first flew on August 17, 1999, but the first official flight was made on October 6, 1999. It was powered by two engines Pratt & Whitney Canada PW206. Another prototype, with longer and slimmer fuselage, and powered with PW207K engines, flew on December 27, 2001 (no. 03, then 904). The third prototype introduced side doors of transport compartment opening upwards and downwards, instead of sliding ones. It was offered as a military trainer variant Ansat-UT with dual controls.

The Ansat-UT won a contest for a trainer helicopter for the Russian Air Force in 2001, and there are planned orders. Serial Ansat-UT's are to be fitted with wheeled landing gear, instead of skis.

As for 2005, apart from the fourth prototype, Ansat has not been built in any bigger quantity. From 2002, it undergoes certification process. It is offered by Kazan Helicopters for Russian and foreign market, and for the Russian Air Force. Estimated price is about 2-2.5 million USD. 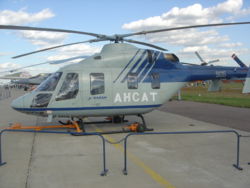 Helicopter of a classic construction. It takes a pilot and 10 passengers (one of them seats next to the pilot). A fuselage has a pair of doors in pilot's cab, and a pair of upwards and downwards opening side doors in transport compartment. After dismounting seats, it can take 1000 kg of cargo inside. On external hook, it can take 1300 kg of load. Powered with two turboshaft engines Pratt & Whitney Canada PW207K, 630 shp. Four-blade main rotor. Two-blade rear rotor.