The North American XF-108 Rapier was a proposed American design for a long-range, high-speed interceptor aircraft to defend the United States and Canada from supersonic Soviet bombers.

A very high performance, long-range interceptor had been proposed by the USAF as early as 1952, but formal development of what became known as the Long-Range Interceptor, Experimental (LRI-X) was not approved until 20 July 1955. The specification was laid down on 6 October, calling for an aircraft that could fly at 60,000 ft (18,000 m) at a speed of Mach 1.7 (1,122 mph/1,795 km/h at that altitude) with a range of 1,150 miles (1,840 km). It was to have a two-man crew, at least two engines, and a powerful radar. Contracts for preliminary studies were issued to North American Aviation, Lockheed, and Northrop. Of the paper designs, the North American proposal, dubbed NA-236, seemed most promising. Political and budgetary difficulties led to the cancellation of the program on 9 May 1956.

After considerable confusion, the program was reinstated on 11 April 1957 and North American was awarded a contract for two prototypes. The designation F-108 was issued, also known as Weapon System 202A. North American's company designation was NA-257, although it was basically identical to NA-236. At the time, Air Defense Command anticipated an order for 480 aircraft.

The resulting design went through considerable evolution, both owing to its cutting-edge technology and continual redefinition of the USAF requirements. In addition to the F-108's interceptor role, North American proposed it as an escort fighter for the Strategic Air Command's XB-70 Valkyrie supersonic bomber, which NAA was also developing. The F-108 was intended to share the Valkyrie's General Electric J93 engines and some other subsystems. By that time, however, it was unlikely that it would have served in that role. SAC had lost any interest in the escort fighter concept and, in any case, the F-108's range was at best marginal to accompany the B-70 all the way to its target and back.

The eventual design, which was built as a full-sized XF-108 mock-up shown to Air Force officials in early 1959, was given the name "Rapier" on 15 May 1959 following a contest by the Air Defense Command asking airmen for suggestions. Production numbers were radically curtailed and the program was officially cancelled on 23 September of that year. North American kept refining the design through 1960 in hopes that the program might be revived, but it never was. Testing of the radar and missiles developed for the aircraft continued, intended for the Lockheed YF-12 program, but that, too, was ultimately cancelled, and no Mach 3 interceptor has yet been built in the U.S.

The F-108 had a very large "cranked" delta wing, with a 58° sweep angle at the leading edge and wingtip extensions of about 40°, with a 4° anhedral. There were fixed ventral stabilizers on the wings, mounted at mid-span, and a tall all-moving vertical tailfin, supplemented by two ventral stabilizers that extended when the landing gear retracted. Although some earlier versions of the design had had separate tailplanes and later forward canards, both were abandoned in the final design. There were two General Electric J93 turbojet engines, also used in North American's XB-70 Valkyrie bomber, in the fuselage; USAF requests for an alternate installation of the Pratt & Whitney J58 later used in the SR-71 came to naught. The engines were fed by side-mounted intakes with a shape very similar to the later North American A-5 Vigilante.

The aircraft had a crew of two, a pilot and a weapon systems officer (WSO), in tandem cockpits. Each had an escape capsule designed to completely enclose each crewman in the event of emergency, permitting safe ejection even at extreme speeds and altitudes. The WSO in the rear seat had no flight controls.

The F-108 was intended to carry the Hughes AN/ASG-18 radar, the U.S.'s first pulse doppler radar set. It was to have look-down/shoot-down capability, but could only track one target at a time. It was a massive 2,100 lb (950 kg) installation filling most of the long nose. The radar was paired with an infrared search and track (IRST) system with irdomes on the wing leading edges.

The radar was used to guide the Hughes GAR-9 (later redesignated AIM-47) air-to-air missile, three of which would be carried on a rotary launcher in an internal weapons bay. The GAR-9 was a very large, long-range weapon with its own radar set for terminal homing. It was intended to fly at Mach 6, with a range of almost 115 miles (185 km). An alternative version with a heat-seeking terminal homing mode was also developed. The missiles were 12 ft 6.5 in (3.82 m) long with a 33 in (84 cm) wingspan, weighing 818 lb (371 kg) for the radar version, 998 lb (453 kg) for the IR version. The earlier Northrop N-126 proposal suggested various weapons combinations, including GAR-1 Falcon missiles, packs of 2.75 in (70 mm) FFARs, or two T-171 Vulcan 20 mm cannon, but none were part of the North American design.

The F-111B and later F-14 Tomcat would both adopt a pulse doppler radar and long range AIM-54 Phoenix missiles similar to the AIM-47. 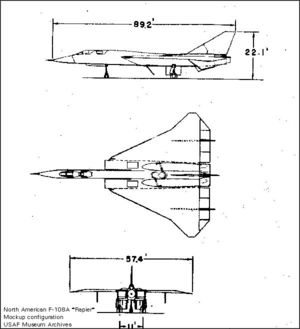