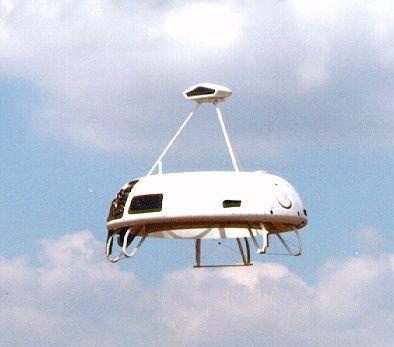 The Cypher is a type of unmanned aerial vehicle developed by Sikorsky Aircraft Corporation. It is a vertical takeoff and landing aircraft which uses two opposing rotors enclosed in a circular shroud for propulsion.

The single prototype first flew in April 1992 and flew untethered the following year. Since then, over 550 flights have been made in a series of demonstrations for the US government.

The doughnut-shaped Cypher can carry a sensor package on struts above its hull, or can be used to transport loads of up to 50 lb (23 kg).

The Cypher was featured in the video game Metal Gear Solid 2: Sons of Liberty as both an unarmed surveillance UAV and as an armed security UAV, protecting an oil cleanup plant. This style of deployment may not be far from reality soon.

The Cypher was also featured as a usable tool in the game Tom Clancy's Ghost Recon Advanced Warfighter. While unable to be used in combat, it can scope the area for enemies and move around based on a point and click map system.