The Seversky P-35 was a fighter aircraft built in the United States in the late 1930s. The P-35 was the first single-seat fighter in US Army Air Corps to feature all-metal construction, a retractable landing gear and an enclosed cockpit.

The origins of the P-35 trace back to the Seversky SEV-3 amphibious aircraft which was developed into the Seversky BT-8 basic trainer. The trainer proved grossly underpowered and was quickly replaced by the North American BT-9. Seversky's chief designer Alexander Kartveli also proposed a two-seat fighter derivation of the SEV-3 called SEV-2XP. The aircraft, powered by a 735 hp (550 kW) Wright R-1670 radial engine, had fixed landing gear in aerodynamic spats and was armed with one 0.50 in and one 0.30 in forward-firing machine guns plus an additional 0.30 in for rear defence.

When USAAC announced a competition for a new single-seat fighter in 1935, Seversky sent SEV-2XP confident that it would win in spite of being a two-seater. However, the aircraft was damaged during its transit to the fly-offs at Wright Field. Fortunately for the company, USAAC delayed the fly-offs until March 1936 which allowed Seversky to rework the fighter into a single-seat SEV-1XP with retractable landing gear. As the aircraft was underpowered, the powerplant was upgraded to a Pratt & Whitney R-1830-9 Twin Wasp with 850 hp (634 kW) available on takeoff. The SEV-1XP won the USAAC competition on 16 June 1936, beating Curtiss Model 75 Hawk in the finals, with the company awarded an order for 77 P-35 fighters.

Ironically, because of the unrest in Europe, the USAAC also ordered 210 Curtiss P-36s. The difference in the number of orders was in part due to P-35 being considerably more expensive (more than $1,500 per aircraft) and, in part, due to the sale of 2PA two-seat aircraft to the Japanese Navy (see below). Modifications from SEV-1XP to production P-35 included partial instead of complete mainwheel fairings, seven degrees of dihedral to the outer wing panels and revised canopy. 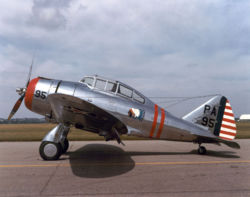 Aiming to increase sales, Alexander P. de Seversky personally took a P-35 on a tour around Europe in early 1939; in the process, he became the first American pilot to fly the Supermarine Spitfire. After he was voted out by the Board of Directors, Republic (as the company became known after reorganization), sold Sweden a refinement of the P-35 designated the EP-106 (Export Pursuit) to replace the country's aging Gloster Gladiator biplanes. The EP-106 was powered by a Pratt & Whitney R-1830-45 Twin Wasp engine with 1,000 horsepower (750 kW), improving its performance by over 25 mph (40 km/h). The Swedes ordered a total of 120 EP-106s, with initial order placed in mid-1939, and 60 aircraft delivered. The aircraft were armed with two 7.9 mm machine guns in the nose and one 13.2 mm machine gun in each wing, and could carry 350 lb (160 kg) of bombs. The aircraft were given the Swedish Air Force designation J 9.

Seversky also built a two-seat version of the P-35 designated 2PA. Two aircraft, one with conventional landing gear and one with floats, along with the manufacturing license were sold to USSR but it appears that the Soviets never put it into production. In what proved to be an unpopular move for Seversky, twenty 2PA-B3 were sold to the Japanese Navy which briefly employed them in the Second Sino-Japanese War as Navy Type S Two-Seat Fighter or A8V-1 (Allied codename "Dick"). The Japanese were unimpressed with the aircraft and eventually relegated two of them to the Asahi Shimbun newspaper as hacks. Sweden ordered 52 2PAs (Swedish designation B 6) but received only two prior to the embargo. The remaining 50 aircraft were appropriated by USAAC, re-armed with 0.30 in and 0.50 in machine guns, and used as advanced trainers named AT-12 Guardsman.

The P-35's successor, the P-43 Lancer was based on the P-35 (and its lightweight higher-speed counterpart, the P-44 Rocket) and was already outdated when compared to British and German warplanes currently in service over Europe. Alexander Kartveli began to consider its successor using lessons learned from the P-35, P-43 and P-44, eventually emerging as the P-47 Thunderbolt.

The first P-35 were delivered to the 1st Pursuit Group stationed at the Selfridge Field in Michigan. The aircraft utilized a wet wing to save weight and ground personnel quickly learned about the persistent fuel leaks. The P-35's performance was poor even by contemporary standards and, although USAAC fliers appreciated the aircraft's ruggedness, it was already obsolescent by the time deliveries were finished in 1938. Nonetheless, the P-35 design served as the basis for the promising Italian Reggiane Re.2000 Falco fighter.

On 18 June 1940, United States declared an embargo against exporting weapons to any nation other than Great Britain. Optimistically, Republic continued to manufacture EP-106s which, by the 24 October 1940 order, 60 were taken over by the USAAC as the P-35A. The aircraft were re-armed to American standards with 0.30 in and 0.50 in machine guns but apparently retained metric flight instruments and flight manuals written in Swedish. Of these, three aircraft were kept in United States as instructional airframes for mechanics, and 57 were sent to the Philippines. About 10 of these were quickly lost in accidents; the rest fought in the futile defense of the islands in December 1941 and January 1942 but were hopelessly outclassed by the Japanese fighters. Lack of armor and self-sealing fuel tanks made the aircraft extremely vulnerable and by 12 December 1941, only eight P-35As were still in flying condition. In 1942, surviving P-35As were redesignated RP-35A, the letter "R" indicating the aircraft were "restricted" or unfit for combat. Their last sortie was flown over Macajalar Bay on 3 May.

The Swedish Air Force received 60 J 9s in the spring-summer 1940. The aircraft were assigned to the F8 air wing protecting Stockholm, replacing its outdated Gloster Gladiators. Swedish J 9s served with Flygvapnet as a fighter until 1946. Later, ten aircraft were equipped with cameras but retained their J 9 fighter designation and, in addition, a number of others were used for liaison and general flight training. The last seven J 9 aircraft remained in service until September 1952.

Two J 9 are preserved in museums today, one in the Swedish Air Force Museum and one in Kermit Weeks' Fantasy of Flight in Florida, the latter presently undergoing restoration to flying condition. A P-35 is on display at the National Museum of the United States Air Force as a P-35A. In addition, an AT-12, one of those who didn't make it to Sweden, has recently been restored back to flying condition at the Planes of Fame in Chino Airport, Los Angeles.