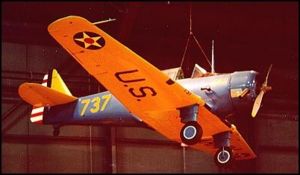 The North American BT-9 was a monoplane primary trainer aircraft that served with the United States Army Air Corps and other allied countries during World War II. It was a contemporary of the Kaydet biplane trainer.

The NA-57, designated by the Army Air Corps as a BT-9, was a basic trainer developed by North American (NA). Except for the movable surfaces on the tail and wings which were fabric covered, it was an all metal military trainer. The Army Air Corps purchased a total of 199 BT-9s, BT-9As and BT-9Bs. Many foreign countries also used variants of this aircraft. The NA-26, an improved model with retractable landing gear was initially produced as the basic combat trainer (BC-1), before being designated the AT-6 Texan advanced trainer.