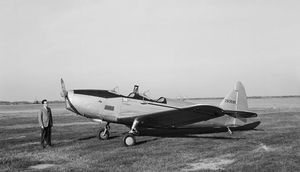 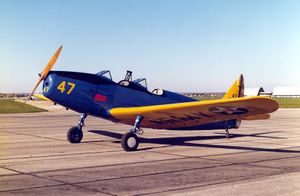 The Fairchild PT-19 was a monoplane primary trainer aircraft that served with the USAAC, RAF and RCAF during World War II. It was a contemporary of the Kaydet biplane trainer.

The PT-19 series was developed from the Fairchild M-62 when the USAAC first ordered the aircraft in 1940 as part of its expansion program. The original production batch of 275 were powered by the inline 175 hp Ranger L-440-1 engine and designated the PT-19. In 1941 mass production began and 3,181 of the PT-19A model, powered by the 200 hp L-440-3, were made by Fairchild. An additional 477 were built by Aeronca and 44 by the St Louis Aircraft Corporation. The PT-19B, of which 917 were built, was equipped for instrument flight training by attaching a collapsible hood to the front cockpit.

The final variant was the PT-26 which used the L-440-7 engine. The Canadian-built versions of these were designated the Cornell for use by the Royal Air Force Empire Air Training Scheme in Canada and Rhodesia.