The Grumman F7F Tigercat was the first twin-engined fighter aircraft design to enter service with the United States Navy. Designed for the new Midway class aircraft carriers, the aircraft were too large to operate from earlier decks. Although delivered to United States Marine Corps combat units before the end of World War II, the Tigercat did not see combat service in that war. Most F7Fs ended up in land-based service, as attack aircraft or night fighters; only the later F7F-4N was certified for carrier service. They saw service in the Korean war and were withdrawn from service in 1954.

The contract for the prototype XF7F-1 was signed on June 30, 1941. Grumman's aim was to produce a plane that out-performed and out-gunned all existing fighter aircraft, and that had an auxiliary ground attack capability.[1] Armament was heavy: four 20 mm cannons and four 0.50 in (12.7 mm) machine guns, as well as underwing and under-fuselage hardpoints for bombs and torpedoes. Performance met expectations too; the F7F Tigercat was one of the highest-performance piston-engined fighters, with a top speed well in excess of the US Navy's single-engined aircraft - 71 mph faster than a F6F Hellcat at sea level.[2] The opinion of Capt. Fred M. Trapnell, one of the Navy's premier test pilots, was that the "It's the best damn fighter I've ever flown." [3]

All this was bought at the cost of heavy weight and a high landing speed, but what caused the aircraft to fail carrier suitability trials was poor directional stability with only one engine operational, as well as problems with the tail-hook design.[4] Therefore, the initial production series was only used from land bases by the USMC, as night fighters with APS-6 radar.[5] At first, they were single-seater F7F-1N aircraft, but after the 34th production aircraft, a second seat for a radar operator was added; these planes were designated F7F-2N. 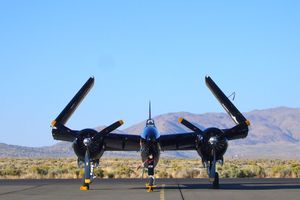 The Tigercat was designed to have a very small frontal area.

The next version produced, the F7F-3 was modified to correct the issues that caused the aircraft to fail carrier acceptance and this version was again trialled on the USS Shangri-La. A wing failure on a heavy landing caused the failure of this carrier qualification too. F7F-3 aircraft were produced in day fighter, night fighter and photo-reconnaissance versions. [6]

A final version, the F7F-4N, was extensively rebuilt for additional strength and stability, and did pass carrier qualification, but only 12 were built. [7]

Marine Corps night fighter squadron VMF(N)-513 flying F7F-3N Tigercats saw action in the early stages of the Korean War, flying night interdiction and fighter missions and shooting down two Polikarpov Po-2 biplanes.[8] This was the only combat use of the aircraft.

Most F7F-2Ns were modified to control drones for combat training, and these gained bubble canopies over the rear cockpit for the drone controller. A F7F-2D used for pilot tranisitoning also had a rear sliding, bubble canopy.[9]

In 1945, two Tigercats were evaluated, but rejected, by the British Royal Navy preferring a navalized version of the de Havilland Hornet. [10]

A number of Tigercats were used as water bombers to fight forest fires in the 1960s and 1970s, and for this reason 12 examples exist today. Six of these are still airworthy.[11] [12]

As warbird racers, in 1976, Robert Forbes qualified an F7F-3N but did not race at Reno. Another modified F7F-3N Tigercat, (Bu No. 80503) "Big Bossman" owned by Mike Brown presently competes in the national air racing circuit.[[1]]

At least three F7F Tigercats are preserved in aviation musuems:

The Grumman F7F was originally named the "Tomcat" but this name was rejected as it was considered too suggestive.[13] The name would much later be used for the Grumman F-14.