The North American F-100 Super Sabre was a jet fighter aircraft that served with the United States Air Force (USAF) from 1954 to 1971 and with the Air National Guard (ANG) until 1979. It was first US fighter capable of supersonic speed in level flight.

The F-100 also served in several NATO air forces and with other US allies. In its later life, it was often referred to as "the Hun," a shortened version of "one hundred." Considered the successor to the F-86 Sabre, it would be largely replaced by the F-4 Phantom II and later, the F-16 Falcon. The F-100 is noted as the first of the Century Series collection of USAF jet fighters.

In January 1951, North American Aviation delivered an unsolicited proposal for a supersonic day fighter to the United States Air Force. Named Sabre 45 because of its 45° wing sweep, it represented an evolution of the F-86 Sabre. The mockup was inspected 7 July 1951 and after over a hundred modifications, the new aircraft was accepted as the F-100 on 30 November 1951. On 3 January 1952, the USAF ordered two prototypes followed by 23 F-100As in February and an additional 250 F-100As in August.

The YF-100A first flew on 25 May 1953, seven months ahead of schedule. It reached Mach 1.05 in spite of being fitted with a de-rated XJ57-P-7 engine. The second prototype flew on 14 October 1953, followed by the first production F-100A on 9 October 1953. The USAF operational evaluation from November 1953 to December 1955 found the new fighter to have superior performance but declared it not ready for widescale deployment due to various deficiencies in the design. These findings were subsequently confirmed during Project Hot Rod operational suitability tests. Particularly troubling was the yaw instability in certain regimes of flight which produced inertia coupling. The aircraft could develop a sudden yaw and roll which would happen too fast for the pilot to correct and would quickly overstress the aircraft structure to disintegration. It was under these conditions that North American's chief test pilot, George Welch, was killed while dive testing an early-production F-100A on 12 October 1954. A related control problem stemmed from handling characteristics of the swept wing at high angles of attack. As the aircraft approached stall speeds, loss of lift on the tips of the wings caused a violent pitch-up.

Nevertheless, delays in the F-84F Thunderstreak program pushed the Tactical Air Command to order the raw F-100A into service. TAC also requested that future F-100s should be fighter-bombers with nuclear bomb capability.

The F-100A officially entered USAF service on 27 September 1954 with 479th Fighter Wing at George AFB. By 10 November 1954, the F-100As suffered six major accidents due to flight instability, structural failures, and hydraulic system failures, prompting the Air Force to ground the entire fleet until February 1955. The 479th finally became operational in September 1955. Due to ongoing problems, the Air Force began phasing out the F-100A in 1958, with the last aircraft leaving active duty in 1961. By that time, 47 aircraft were lost in major accidents[1]. Escalating tension due to construction of the Berlin Wall in August 1961 forced the USAF to recall the F-100As into active service in early 1962. The aircraft was finally retired in 1970.

The TAC request for a fighter-bomber was addressed with the F-100C which flew in March 1954 and entered service on 14 July 1955 with 450th Fighter Wing, Foster AFB. Operational testing in 1955 revealed that the F-100C was at best an interim solution, sharing all the vices of the F-100A. The uprated J57-P-21 engine boosted performance but continued to suffer from compressor stalls. On a positive note, the F-100C was considered an excellent platform for nuclear toss bombing because of its high top speed. The inertia coupling problem was more or less addressed with installation of a yaw damper in the 146th F-100C, later retrofitted to earlier aircraft. A pitch damper was added starting with the 301st F-100C, at a cost of US$10,000 per aircraft[1].

The definitive F-100D aimed to address the offensive shortcomings of the F-100C by being primarily a ground attack aircraft with secondary fighter capability. To this effect, the aircraft was fitted with autopilot, upgraded avionics, and, starting with the 184th production aircraft, the Sidewinder capability. In 1959, 65 aircraft were modified to also fire the AGM-12 Bullpup air-to-ground missile. To further address the dangerous flight characteristics, the wing span was extended by 26 inches (66 cm) and the vertical tail area was increased by 27%.

The F-100D flew on 24 January 1956, entering service on 29 September 1956 with 405th Fighter Wing at Langley AFB. The aircraft suffered from reliability problems with the constant speed drive which provides constant-frequency current to electrical systems. In fact, the drive was so unreliable that USAF required it to have its own oil system to minimize damage in case of failure. Landing gear and brake parachute malfunctions claimed a number of aircraft, and the refueling probes had a tendency to break away during high speed maneuvers. Numerous post-production fixes created such a diversity of capabilities between individual aircraft that by 1965 around 700 F-100Ds underwent High Wire modifications to standardize the weapon systems. High Wire modifications took 60 days per aircraft at a total cost of US$150 million. In 1966, Combat Skyspot program fitted some F-100Ds with an X band radar transmitter to allow for ground-directed bombing in inclement weather or at night.

In 1967, the USAF began a structural reinforcement program to extend the aircraft's service life from the designed 3,000 flying hours to 7,000. Over 500 F-100Ds were lost, predominantly in accidents. After one aircraft suffered wing failure, particular attention was paid to reinforcing the wings with external bracing strips. During the Vietnam War, combat losses constituted as many as 50 aircraft per year. On 7 June 1957, an F-100D fitted with an Astrodyne booster rocket making 150,000 lbf (667.2 kN) of thrust successfully performed a zero length launch. The capability was incorporated into late-production aircraft. After a major accident, the USAF Thunderbirds reverted from F-105 Thunderchief to the F-100D which they operated from 1964 until it was replaced by the F-4 Phantom II in 1968.

The F-100 was the subject of many modification programs over the course of its service. Many of these were improvements to electronics, structural strengthening, and projects to improve maintainability. One of the more interesting of these was the replacement of the original afterburner of the J-57 engine with the more advanced afterburners from retired Convair F-102 Delta Dagger interceptors. This modification changed the appearance of the aft end of the F-100, doing away with the original "petal-style" exhaust. The afterburner modification started in the 1970s and solved maintenance problems with the old type as well as operational problems, incl. compressor stall problems.

The F-100F two-seat trainer entered service in 1958. It received many of the same weapons and airframe upgrades as the F-100D, including the new afterburners. By 1970, 74 F-100Fs were lost in major accidents.

After the Super Sabres were withdrawn from service a large number of them were converted into remote-controlled drones (QF-100) for use as targets for various antiaircraft weapons, including missile-carrying interceptors.

High Wire project was a modernization program for selected F-100Cs, Ds and F aircraft. It consisted of two modifications: 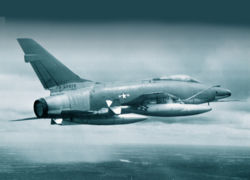 The F-100Ds arrived in Southeast Asia in 1962 and began flying combat missions. On 18 August 1964 the first F-100D flown by 1LT Colin A. Clark, from the 428th TFS, was shot down by ground fire, he ejected and survived. On 04 April 1965 an F-100 Supersabre piloted by Capt. Donald Kilgus shot down one of the first enemy jet aircraft in aerial combat in Vietnam, a Mig-17, using cannon fire. The aircraft was used for ground attack within South Vietnam. The two-seat F-100F operated as a "fast-FAC" (forward air controller) spotting targets for other aircraft. It was also the first Wild Weasel SEAD aircraft whose specially trained crews were tasked with locating and destroying enemy air defenses. Four F-100F Wild Weasel I were fitted with an APR-25 vector radar homing and warning (RHAW) receiver, an IR-133 panoramic receiver with greater detection range, and a KA-60 panoramic camera. The RHAW could detect early warning radars and, most importantly, emissions from SA-2 Guideline tracking and guidance systems. These aircraft deployed to Korat Royal Thai Air Force Base in Thailand in November 1965, and began flying combat missions with 388th Tactical Fighter Wing in December. They were joined by three more aircraft in February 1966. All Wild Weasel F-100Fs were eventually modified to fire the AGM-45 Shrike anti-radiation missile. By war's end, 242 F-100 Super Sabres had been lost in Vietnam, and the F-100 was progressively replaced by the F-4 Phantom II and the F-105 Thunderchief. [2]

The costs are in contemporary United States dollars and have not been adjusted for inflation.[1]

Armee de l'Air was the first allied air force to receive the F-100 Super Sabre. The first plane arrived in France on May 1, 1958. 85 F-100Ds and 15 F-100Fs were supplied to France, and assigned to the NATO 4th Allied Tactical Air Force. They were stationed in German French bases. French F-100s were used on combat missions flying from bases in France against targets in Algeria.

Turk Hava Kuvvetleri (THK) received about 206 F-100C,D and F Super Sabres. Most came from US stocks, and a few were supplied by Denmark. Turkish F-100s saw extensive action during the 1974 invasion of Cyprus. 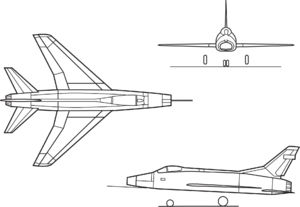