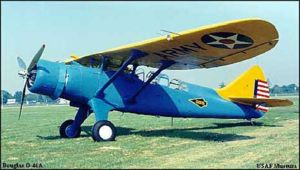 The Douglas O-46 was an observation airplane used by the United States Army Air Corps.

The O-46A, the last of a long line of Douglas observation planes, was a victim of progress. It was designed to operate from established airfields behind fairly static battle lines as in WW I. However, in 1939, a report was issued on the O-46A which stated that it was too slow and heavy to outrun and outmaneuver enemy pursuit planes, too heavy to operate from small, wet, unprepared fields, and too large to conceal beneath trees. This report was a forecast of the future, for WW II with its rapidly changing battle lines proved the need for light, maneuverable observation aircraft which could operate from unimproved airstrips. Consequently, in 1942, the "O" (observation) designation was changed to "L" (liaison).

The Air Corps ordered 90 -46As in 1935. At least 11 saw overseas duty; two were destroyed in the Japanese raid on Clark Field in the Philippines on December 8, 1941. The remainder were declared obsolete in late 1942 and after that were used primarily in training and utility roles.