The An-225 Mriya (Антонов Ан-225 Мрія, NATO reporting name: Cossack) is a strategic airlift transport aircraft which was built by Antonov, and is currently the world's largest airplane. The design, built to transport the Buran orbiter, was an enlargement of the successful An-124 Ruslan. Mriya (Мрія) means "dream" (inspiration) in Ukrainian.

With a maximum gross weight of 640 tonnes (1,411,000 lb), the An-225 is the world's heaviest aircraft. The Hughes H-4 Hercules, known to most as the "Spruce Goose", had a larger wingspan but only flew once; the An-225 is the largest aircraft in the world to take off multiple times.[1] The An-225 is also larger than the Airbus A380 airliner and the C-5 Galaxy, the nearest equivalent heavy airlifter. 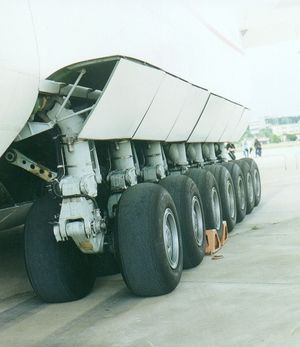 The An-225 was designed for the Soviet space program as a replacement for the Myasishchev VM-T. Able to airlift the Energia rocket's boosters and the Buran space shuttle, its mission and objectives are almost identical to that of the Airbus Beluga and the United States' Shuttle Carrier Aircraft.[2]

The An-225 is an extension of Antonov's earlier An-124. To meet the needs of its new role, fuselage barrel extensions were added fore and aft of the wings, which received root extensions.[2] Two more Lotarev D-18 turbofan engines were added on the new wing roots, bringing the total to six, and an increased-capacity landing gear system with 32 wheels was designed. The An-124’s rear cargo door and ramp were removed to save weight, and the empennage was changed from a single vertical stabilizer to a twin tail with an oversized horizontal stabilizer. The twin tail was made necessary by the requirement to carry very large and heavy external loads, which would disturb the aerodynamics of a conventional tail. Unlike the An-124, the An-225 was not intended for tactical airlifting and is not designed for short-field operation.[2]

The An-225 first flew on December 21 1988. Two aircraft were built, but only one An-225 (tail number UR-82060) is currently in service. It is commercially available for carrying ultra heavy and/or oversize freight, up to 250,000 kg (550,000 lb) internally[2] or 200,000 kg (440,000 lb) on the upper fuselage. Pieces on the upper fuselage can be 70 m long.[3] A second An-225 was partially built during the late 1980s, in connection with the Soviet space program. Following the collapse of the Soviet Union in 1990 and the associated cancellation of the Buran space program the lone operational An-225 was placed in storage. The six Lotarev engines were removed for use on An-124s, and the second An-225 airframe (nearing completion and awaiting engines) was also mothballed.

The Antonov-225 at Munich Airport 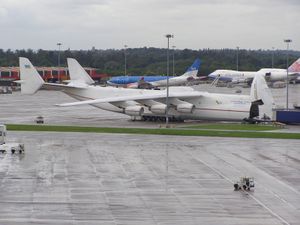 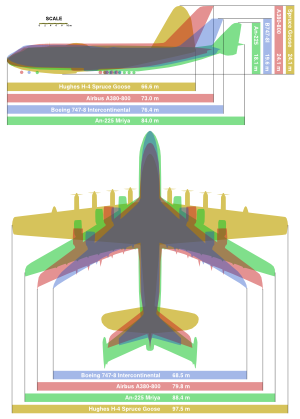 A size comparison between four of the largest aircraft

In the late 1980s efforts were begun by the Soviet government to generate revenue from its military assets.

In 1989 a holding company was set up by the Antonov Design Bureau as a heavy airlift shipping corporation under the name "Antonov Airlines", based in Kiev, Ukraine and operating from London Luton Airport in partnership with Air Foyle HeavyLift.[3][4].

The company initiated operations with a fleet of four An-124-100s and three Antonov An-12s, but by the late 1990s it was apparent that there was a need for aircraft larger than the An-124.

In response to this need, the original An-225 was re-engined, modified for heavy cargo transportation, and placed back in service under the management of Antonov Airlines.

On 23 May 2001, the An-225 received its type certificate from the Interstate Aviation Committee Aviation Register (IAC AR).[5] The type's first flight in commercial service departed from Stuttgart, Germany on January 3, 2002, flying to Thumrait, Oman with 216,000 prepared meals for American military personnel based in the region. This vast quantity of ready meals was transported on some 375 pallets and weighed a total 187.5 tons.[6] Since then the An-225 has become the major workhorse of the Antonov Airlines fleet, transporting objects once thought impossible to move by air, such as locomotives, and 150 ton generators, as well as becoming a valuable asset to international relief organizations for its ability to quickly transport huge quantities of emergency supplies during disaster relief operations.[7] By 2000 it had become apparent that the demand for the An-225 had exceeded the airline's capacity to book, and in September 2006 the decision was made to complete the second An-225. This should be accomplished by 2008. Beginning June 2003, the An-225, along with An-124s, delivered over 800 tonnes of equipment to aid humanitarian efforts in Iraq.[8] The An-225 has also been contracted by the U.S. government to transport military supplies to the Middle East in support of Coalition forces.[7] American use of a Soviet-designed aircraft can be seen as a testament to the success of Soviet heavy lift design, as no comparable U.S. aircraft has ever been developed. The U.S. government is currently considering a long term contract with Antonov Airlines for the additional production and use of ten An-124s and one An-225, which could be operated considerably cheaper than the six smaller C-17s originally proposed for the same duties.

Use as a launch platform

Design work is currently under way to use the aircraft as a flying launch system for future aerospace systems. One of the most promising projects is the MAKS joint Russian/Ukrainian multipurpose aerospace system.[1] When used as a space vehicle air launcher, the aircraft would be fitted with the equipment required for prelaunch preparation of aerospace systems. Implementation of these projects would considerably reduce the cost of transporting payloads into space.[4] 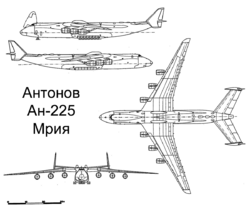 Wikimedia Commons has media related to:
Antonov An-225