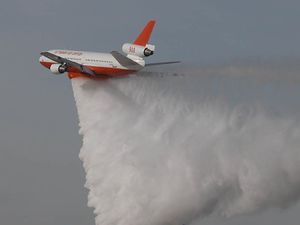 Tanker 910 during a drop demonstration in December, 2006

Tanker 910 is the call-sign of 10 Tanker Air Carrier, a converted McDonnell Douglas DC-10 aircraft used for fighting wildfires, typically in rural areas. The turbofan-powered craft carries up to 12 thousand gallons of water or fire retardant which can be released in eight seconds.

The aircraft was developed as a joint venture under the name of "10 Tanker" between Cargo Conversions of San Carlos, California and Omni Air International, with conversion work being performed by Victorville Aerospace at the Victorville Airport. Tanker 910 was debuted at the 2005 Paris Air Show.

The three-engine wide-body jet costs about $52,000 per day for governments to rent. The number of drops it can make in a day is only limited due to the time it takes to reload the jet with water or fire retardant and its need for a proper landing field, which may well be a considerable distance from the subject fire. One drop from Tanker 910 is equivalent to 20 drops from an S-2 Tracker.

Tanker 910 is getting competition from a Boeing 747 that has been converted to tanker use by Evergreen International Aviation.