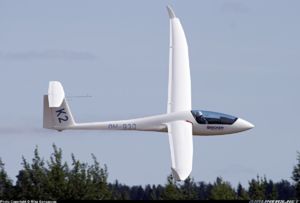 A Ventus-2bx at the 2005 European Gliding Championships in Räyskäla, Finland.

The Ventus-2a and 2b are 15 metre sailplanes. The 'a' version has a narrow fuselage and the wider fuselage version is called the 2b. Winglets are used with these models. The 18 metre span Ventus-2c was introduced in 1995 but was almost an entirely different aircraft with a different fuselage and wings, but it has the option of shorter tips with winglets to fly as a 15 metre glider.

From 2003 the Schempp-Hirth Discus-2 fuselage was used for all versions, which now have the designations 2ax, 2bx and 2cx. Flight tests in 1996 showed that the 15 metre version had a glide angle of 46:1 but only after considerable work on sealing gaps and by using turbulators.

The narrow Ventus-2a has been highly successful in competitions with consecutive World Championship wins from 1995 to 2003.

Some Ventus-2c and 2cx are fitted with small sustaining engines (turbos) and are designated with a T suffix, while some are self-launching and have the suffix 'M'.