The Schempp-Hirth Discus is a Standard Class glider designed by Schempp-Hirth. It was produced in Germany between 1984 and 1995 but has continued in production in the Czech Republic. It replaced the Standard Cirrus. It was designed by Klaus Holighaus.

Studies had long shown that the ideal wing for minimizing induced drag should be an elliptic planform. To keep production costs down, a triple-trapezoidal approximation of this shape was adopted for the Discus. The wing section was also new. Winglets were only available towards the end of the production run, though many have been retro-fitted. The fuselage and tail were adapted from the Schempp-Hirth Ventus. A version with a narrow fuselage is called the Discus 'a' and the wider fuselage version is called the 'b'. The fuselage is made of glass reinforced plastic around a steel tube frame. The wings and tail surfaces are also fiberglass with the exception of the main wing spar, which is made of carbon fiber. There is a 6,5L water ballast tank in the fin for trimming purposes when the main wing mounted ballast tanks are in use (184L combined), for a maximum load of ~50kg/m2

The Discus dominated standard class sailplane racing throughout the 1980's, winning the 1985, 1987 and 1989 World Gliding Championships. Over 20 years after its introduction, it remains competitive today. In the 1999 United States Standard Class Nationals, Discus A models finished First, Third and Sixth. Another "A" model was flown to 2nd place in the 2002 US Standard Class Nationals.

The best measured glide ratio is 42.5:1. Though it is considered a high performance sailplane, its handling is well within the capabilities of inexperienced pilots. With no bad manners, powerful airbrakes and a low landing speed, the Discus is popular with clubs. Discuses [1] are easy gliders to assemble, having light wings, automatic control hookups and a single pin securing the wings.

Over 850 Discuses had been built by 2004 and it remains in production today despite the introduction of its successor, the Schempp-Hirth Discus-2. About 12 per year are built under license by Orlican(now: Schempp-Hirth Vyroba) in the Czech Republic as the Discus CS. Some models are fitted with small sustaining engines (turbos) and are designated Discus T. 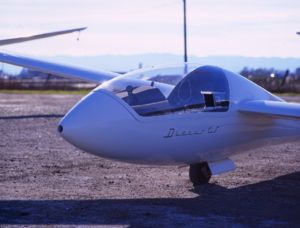