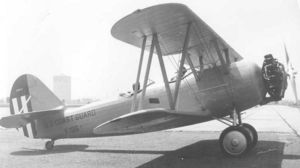 The N3N was a two-place primary training biplane built by the Naval Aircraft Factory (N.A.F.) in Philadelphia, Pennsylvania. The N3N was delivered both as a landplane and a seaplane. The seaplane used a single float under the fuselage and floats under the outer tips of the lower wing. The landplane used a fixed landing gear. The aircraft was powered by a radial Wright designed R-760 Whirlwind engine that developed 225 horsepower (168 kW). Many of these engines were also built by the N.A.F.

The N.A.F. delivered over 900 N3N aircraft beginning in 1935. Of these were N3N-1s and over 750 were N3N-3s. Four of the N3N-3 aircraft were delivered to the United States Coast Guard in 1941. The N3N was the last biplane in US military service - the last (used by the U.S. Naval Academy) were retired in 1961. The N3N was also unique in that it was an aircraft designed and manufactured by an aviation firm wholly owned and operated by the U.S. government (or the Navy, in this specific case) as opposed to private industry. 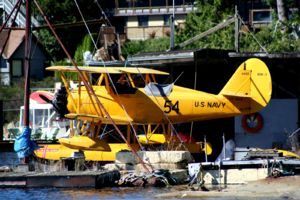 This aircraft-related article is a stub. You can help Wikipedia by expanding it.