The Convair F-106A Delta Dart was the primary all-weather interceptor aircraft for the United States Air Force from the 1960s through the 1980s. Designed as the so-called "Ultimate Interceptor," it has proved to be the last dedicated interceptor in U.S. Air Force|USAF service to date. It was gradually retired during the 1980s, although the QF-106 drone conversions of the aircraft were used until 1998.[2]

The F-106 emerged from the USAF's "Ultimate Interceptor" program of the early 1950s. The F-102 Delta Dagger, originally planned for that role, had a troubled development history, and the initial F-102A was to serve as an interim aircraft pending the design of the definitive F-102B.[3] The Air Force placed an order for the F-102B in November 1955. The new aircraft proved to be an almost totally new design, and was redesignated F-106 on 17 June 1956.[4]

Initial flight tests at the end of 1956 and beginning of 1957 were disappointing, with performance much less than anticipated, but after nearly abandoning the program, the Air Force decided to order 350 F-106s instead of the planned 1,000. After some minor redesign, the F-106A and F-106B (a two-seat trainer version) were delivered to 15 fighter interceptor squadrons starting in October 1959.[5]

The F-106 was equipped with the Hughes MA-1 integrated fire-control system, which could be linked to the Semi-Automatic Ground Environment network for ground control interception missions (letting the aircraft be steered by ground controllers). It was armed with four Hughes AIM-4 Falcon air-to-air missiles in its internal weapons bay along with a single AIR-2 Genie air-to-air nuclear rocket intended to be fired into enemy bomber formations.[8] The MA-1 proved extremely troublesome, and was eventually upgraded more than 60 times in service.[9] 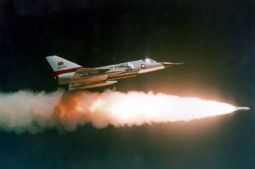 The F-106 served in the continental USA, Alaska, Iceland, and Canada, as well as for brief periods in Germany and South Korea. Although contemplated for use in Vietnam, it never saw combat, nor was it exported to foreign users. It was very popular with its pilots after its initial teething problems were resolved, with exceptional performance. Air-to-air combat testing suggested that the "Six" was a reasonable match for the F-4 Phantom in a dogfight, with similar high-altitude turn performance (aided by the lower wing loading) and superior acceleration, although pilots conceded that the Phantom had better radar and missiles.[10]

The F-106 was progressively updated in service, with improved avionics, an infrared search-and-track system, better instrumentation, and features like an inflight refuelling receptacle and an arresting hook for landing emergencies.[11]

Some F-106As were upgraded in Project Six Shooter [12] in 1972, fitted with a new bubble canopy without the metal bracing along the top (which greatly improved pilot visibility), an optical gunsight, and provision for a single M61 Vulcan 20mm cannon with 650 rounds of ammunition in the weapons bay, replacing the AIR-2 Genie nuclear rocket.

Starting in 1986, many of the surviving planes were converted to drones, designated QF-106A, and used for target practice. The last was destroyed in January 1998. A handful were retained by NASA for test purposes through 1998. The drones were still capable of being flown by people, such as for ferrying to a test-during the test they were flown unmanned.[14]

In service, the F-106's official popular name, "Delta Dart," was rarely used, and the aircraft was universally known simply as the "Six."

The F-106 was the second highest sequentially numbered P/F- aircraft to enter service under the old number sequence (the F-111 was highest sequential number), before it was reset under the 1962 United States Tri-Service aircraft designation system (the FJ Fury became the F-1). 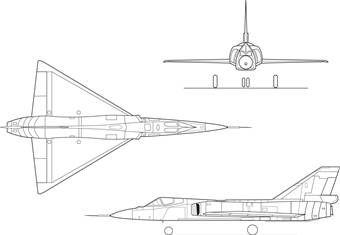