The Convair B-58 Hustler was a high-speed jet bomber capable of Mach 2 supersonic flight. The aircraft was developed for the Strategic Air Command of the United States Air Force during the late 1950s and was in service from 1960 to 1969.

It received a great deal of notoriety due to its sonic boom, which was often heard by the public as it passed overhead in supersonic flight.

The B-58 had a delta wing with a leading-edge sweep of 60°. With four General Electric J79-GE-1 turbojet engines, it was capable of flying at twice the speed of sound. Although its large wing made for relatively low wing loading, it proved to be surprisingly well suited for low-altitude, high-speed flight. It seated three (pilot, bombardier/navigator, and defensive systems operator) in separated tandem cockpits, equipped with a novel ejection capsule that made it possible to eject at an altitude of 21,000 m (70,000 ft) at speeds up to Mach 2 (2,450 km / 1,320 mph), something impossible with standard ejection seats of the period.

The B-58 typically carried a single nuclear weapon in a streamlined MB-1C pod under the fuselage. From 1961 to 1963 it was retrofitted with two tandem stub pylons under each wing, inboard of the engine pod, for B43 or B61 nuclear weapons for a total of 5 nuclear weapons per airplane. A single M61 Vulcan cannon was mounted in a radar-directed tail turret for defense. Although the USAF explored the possibility of using the B-58 for the conventional strike role, it was never equipped for carrying or dropping conventional bombs in service. A photo-reconnaissance pod, the LA-331, was also fielded. Several other specialized pods for ECM or an early cruise missile were considered, but not adopted.

The B-58 crews were elite, hand-picked from other strategic bomber squadrons. Due to some unique aspects of flying a delta-winged aircraft, the pilots used the F-102 Delta Dagger in their transition to the Hustler. The aircraft was difficult to fly and its three-man crews were constantly busy but the performance of the aircraft was exceptional. A lightly loaded Hustler would climb at nearly 46,000 ft/min (235 m/s), comparable to the best contemporary fighters, and it could cruise with a payload at 85,000 ft (26,000 m) (Higham 1975). Nevertheless, it had a much smaller weapons load and more limited range than the B-52 Stratofortress. It had been extremely expensive to acquire (in 1959 it was reported that each of the production B-58As was worth more than its weight in gold). It was a complex aircraft that required considerable maintenance, much of which required specialized equipment, which made it three times as expensive to operate as the B-52. Also against it was an unfavorably high accident rate: 26 aircraft were lost in accidents, 22.4% of total production. SAC had been dubious about the type from the beginning, although its crews eventually became enthusiastic about the aircraft (its performance and design were appreciated, although it was never easy to fly).

This was the original XB-58. Accumulating 150 flights, it was the first B-58 to reach both Mach 1 and Mach 2. This particular craft was used for ALBM testing before being scrapped.

By the time the early problems had largely been resolved and SAC interest in the bomber had solidified, Secretary of Defense Robert McNamara decided that the B-58 was not going to be a viable weapon system. Its early retirement, slated for 1970, was ordered in 1965, and despite efforts of the Air Force to earn a reprieve, proceeded on schedule. The last B-58s in operational service retired January 16, 1970, largely replaced by the FB-111A 'Aardvark'. A total of 116 B-58s were produced: 30 trial aircraft and 86 production B-58A models. Most of the trial aircraft were later brought up to operational standard. Eight were equipped as TB-58A training aircraft.

A number of B-58s were used for special trials of various kinds, including one (#665 called "Snoopy") used for testing the radar system intended for the Lockheed YF-12 interceptor. Several improved (and usually enlarged) variants, dubbed B-58B and B-58C by the manufacturer, were proposed, but never built.

In the 1964 film Fail-Safe, stock footage of B-58s was used to represent "Vindicator" bombers which attacked Moscow.

Singer John Denver's father was a noted B-58 pilot.[citation needed] 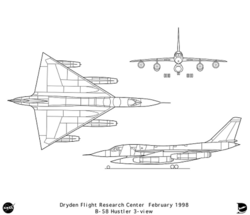 Wikimedia Commons has media related to:
B-58 Hustler