The Sikorsky S-76 Spirit is a commercial helicopter. Its first flight was on March 1977.

The Sikorsky S-76A of the US-American manufacturer Sikorsky is a multi-purpose helicopter of medium size. The machine is propelled by two turboshafts, had four-blade main and a four-blade tail rotor as well as a retractable landing gear. The prototype completed its first flight on 13 March 1977.

The development of the machine began with Sikorsky in the middle of the 1970s. Target group were companies, which looked for a medium business helicopter, as well as the oil drilling industry. Sikorsky's development experiences from the UH-60 Black Hawk served as the basis for the S-74 (later renamed S-76 in honor of the US Bicentennial). The prototype, which was able to transport 2 pilots and 12 passengers, received first two Allison 250C30 turboshafts with 478 KW each.

The S-76A was the main production variant. The type achieved 1982 several class records within the range climbing achievement, maximum speed and ceiling.

Until December 2005 series was S-76C+ in production, which is equipped with Turboméca Arriel 2S1 engines with FADEC. Improved the cockpit was continued to equip with a EFIS suite from Honeywell. The tail rotor could be made quieter by modification. For comfort increase active noise and vibration dampers are used. The main rotor is now manufactured from composite materials.

Since 3 January 2006 the certified S-76 C++ has the more efficient Turboméca Arriel 2S2, an intake air filter, an improved and quieter transmission as well as changes of detail at the interior equipment and electronics. Altogether for the machine 92 orders of (1/2006). 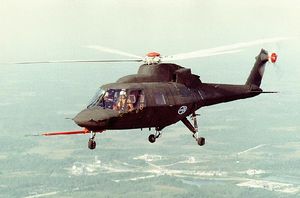 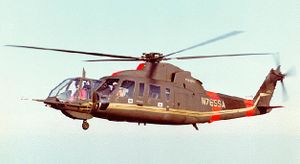 The S-76 is in use around the world with airlines, corporations, hospital, government operators and, notably, the British Royal Family. The first flight was conducted by Nick Lappos and John Dixson, Sikorsky Test Pilots, on March 13, 1977. The world's largest civilian fleet (59) of Sikorsky S-76 helicopters is operated by CHC Helicopter Corporation. 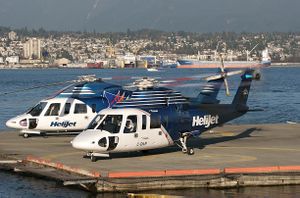 In 1984, the CBS television series Airwolf featured a modified Sikorsky S-76 as an adversary gunship in the episode "HX-1".