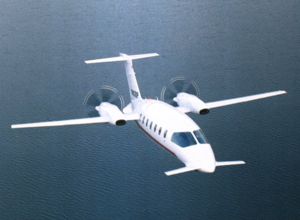 The Piaggio P.180 Avanti is a twin-engine business aircraft produced by Piaggio Aero. It seats up to nine passengers in a generous pressurized cabin, and may be flown by one or two pilots.

The Avanti has turboprop engines in a pusher configuration, placed on a mid-fuselage, high aspect ratio wing. The wing is located very far aft, behind the cabin, and the highly unconventional design also features a T-tail and a fixed canard foreplane. This arrangement allows all three wing surfaces to provide lift in the upwards direction, as opposed to a conventional configuration, where the horizontal stabilizer creates a downward force, requiring the main wing to produce more lift to balance this force, and thus increasing induced drag. The Avanti's aerodynamics and turboprop engines result in an extremely efficient aircraft.

Distinctive design features include a non-constant cross section cabin, the shape of which is a figure of revolution based on a NACA airfoil section. The mid cabin is therefore considerably wider than the cockpit, and the entire cabin sits ahead of the main wing spar. The wing and canard airfoils are custom sections designed by Dr. Jerry Gregorek of Ohio State University to achieve 50% laminar flow at cruise. 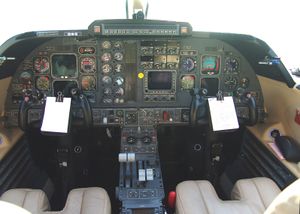 Cockpit and instrument panel aboard a P.180 Avanti.

The P.180 was wind tunnel tested in Italy and the U.S. in 1980 and 1981. A collaboration with Learjet to develop the aircraft was begun in 1982, ending in 1986, when the prototype first flew. U.S. certification was obtained in 1990. The first 12 fuselages were built in Wichita, with H & H Parts and Plessey Midwest, then flown to Italy for assembly. Avanti Aviation Wichita ran out of money in 1994; the project languished until a group of investors led by Piero Ferrari became involved in 1998. The 100th aircraft was delivered in October 2005.

The P.180 makes a distinctive square wave noise when passing overhead, similar to the Beech Starship, due to wing wake and engine exhaust effects on the propeller. It is relatively noisy compared to most turboprop aircraft.

The P.180 appears in Michael Mann's Miami Vice (2006) as one of the business planes used by one of the characters. The two main characters fly an Adam A500, making the film a showcase of unconventional airplane design.

This article does not adequately cite its references or sources.
Please help improve this article by adding citations to reliable sources. (help, get involved!)
This article has been tagged since January 2007.