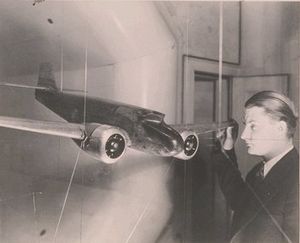 The Electra was Lockheed's first all-metal and twin-engine design. (However, some of Lockheed's wooden designs, such as the Orion had been built by Detroit Aircraft Corporation with metal fuselages.) The name Electra came from a star in the Pleiades. The prototype made its first flight on 23 February 1934 with Marshall Headle at the controls.

Later in 1937, H.T. "Dick" Merrill and J.S. Lambie accomplished a round-trip crossing of the Atlantic Ocean; this feat was declared the first round-trip commercial crossing of that ocean, and it won them the Harmon Trophy. On the eastbound trip, they carried newsreels of the crash of the Hindenburg, and on the return trip, they brought photographs of the coronation of King George VI. 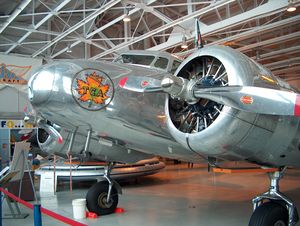 Two L-10 Electras are also preserved in New Zealand's Museum of Transport and Technology at Auckland. Another Auckland-based Electra, owned by Rob Mackley, is under restoration to flying condition.