The Lockheed A-12 was a reconnaissance aircraft built for the Central Intelligence Agency by Lockheed's famed Skunk Works, based on the designs of Clarence "Kelly" Johnson. The A-12 was produced from 1962 through 1964, and was in operation from 1963 until 1968. The single-seat design, which first flew in April 1962, was the precursor to both the Air Force YF-12 interceptor and the famous SR-71 Blackbird reconnaissance aircraft. The final A-12 mission was flown in May 1968, and the program and aircraft retired in June of that year.

As preliminary work began inside Lockheed in the late 1950s, to develop the successor to the U-2, the designs were nicknamed "Archangel", after the U-2 program, which had been known as "Angel". As the aircraft designs evolved and configuration changes occurred the internal Lockheed designation changed from Archangel-1 to Archangel-2, and so on. These nicknames for the evolving designs soon simply became known as "A-1", "A-2", etc. [1] The A-12 was Lockheed's 12th design in this development of the U-2 successor. However, many documents, and references to individual craft, use Johnson's preferred name for the plane, "the Article".

After selection by the CIA in 1959, further design and production of the A-12 took place under the code-name OXCART.

In May of 1967, A-12s were flown to Kadena Air Base on Okinawa, Japan and the BLACK SHIELD unit was declared operational. May of 1967 saw the first flight of the A-12 in a surveillance mission over North Vietnam. In February of 1968, in preparation for the replacement of the A-12 by the SR-71, Lockheed was ordered to destroy all tooling used to create the A-12 Blackbirds. Also during this year, the first SR-71 arrived at Kadena to replace the A-12s. On May 8, over North Korea, the last operational mission of an A-12 was undertaken. Subsequently, all deployed A-12s were sent back to Palmdale, California, where they joined the remainder of the A-12 fleet, and all were placed in storage.

The A-12s were deployed operationally by the CIA in Operation Black Shield to Kadena AB, Okinawa, Japan, with the first A-12 arriving on May 22 1967. With the arrival of two more aircraft (May 24, and May 27) the unit was declared operational on May 30, and began operations on May 31. [2]

Mel Vojvodich flew the first Black Shield operation, over North Vietnam, photographing Surface-to-Air Missile (SAM) sites, flying at 80,000 ft, and at Mach 3.1. From Kadena, during 1967, the A-12s conducted 22 operations in support of the Vietnam War. During 1968, Black Shield conducted numerous operations in Vietnam and also supported the Pueblo Crisis. On May 8, Jack Layton flew the final mission of the A-12s, after which they were retired from active service and replaced by the SR-71. In the just over one year duration of Operation Black Shield, the A-12s flew 29 operational sorties. On June 4, shortly after operations ceased, and just two-and-a-half weeks before the retirement of the entire A-12 fleet, an A-12 out of Kadena, piloted by Jack Weeks, was lost over the Pacific Ocean near the Philippines while conducting a functional check flight after the replacement of one of the craft's engines.

During its deployment on Okinawa, the A-12s (and later the SR-71) and by extension their pilots, were nicknamed Habu after a cobra-like Okinawan pit viper which the locals thought the plane resembled.

On June 21, pilot Frank Murray took the final A-12 flight, to Palmdale, California.

The following timeline describes the overlap of the development and operation of the A-12, and the evolution of its successor, the SR-71.

For the continuation of the OXCART timeline, covering the duration of operational life for the SR-71, see SR-71 timeline.

A total of 18 aircraft were built through the A-12 program production run. Of these, 13 were A-12s, three were YF-12A interceptors for the Air Force (not funded under the OXCART program), and two were M-21s. One of the 13 A-12s was a dedicated trainer aircraft with a second, higher seat.

The A-12s were designed for direct overflight operations, and consequently optimized for altitude and speed. The first five A-12s, in 1962, were initially flown with Pratt & Whitney J75 engines capable of 17,000 lbf thrust each, enabling the J75-equipped A-12s to obtain speeds of approximately Mach 2.0. In 1963, after overcoming initial development challenges, the more powerful 31,500 lbf thrust (and later 34,500 lbf) [3] Pratt & Whitney J58 engines became available. The Pratt & Whitney J58 engines enabled the A-12 to reach speeds of approximately Mach 3.2. From 1963 onward, the A-12s used the J58 engine, with the exception of the A-12 trainer "Titanium Goose", which retained the J75 powerplants for its entire service life.

In 1960 the Air Force approved funding for the conversion of three A-12 production units into two-seat interceptor aircraft capable of Mach 3 speeds. This A-12 variant was designated the YF-12. The program, while successful, never entered full production, and the YF-12 was further redesigned into the famous SR-71 Blackbird. Outwardly quite similar to the original A-12s, the SR-71 was longer by 5.05 feet, had a sensor payload that was 1,500 lb. heavier, and a second crew member who operated the reconnaissance equipment and cameras.

Another A-12 variant, the M-21, was configured as a platform for launching the D-21, a Mach 3+ reconnaissance drone that began development in October 1962. Two M-21s were produced for this purpose. Originally known by the Lockheed designation Q-12, the D-21 was intended to be launched off the back of the M-21 for extra-long range flights and/or missions that were too dangerous for a manned vehicle. The program was cancelled when the second conversion model M-21 crashed, killing a Lockheed test crewman.

Five A-12s, two of the YF-12s, and one of the M-21s were destroyed in flight testing and other accidents. 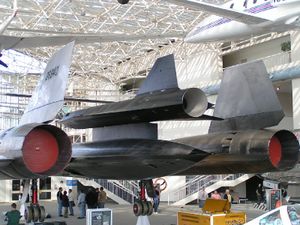 One notable variant of the basic A-12 design was the M-21, used to carry and launch the D-21 drone, an unmanned, faster and higher-flying reconnaissance craft. The M-21 was an A-12 platform modified by replacing the single-seat aircraft's Q bay (which carried its main camera) with a second cockpit for a launch control officer. When mated to the drone for operations, this A-12 variant was known as the M/D-21. The D-21 drone was completely autonomous; having been launched it would overfly the target, travel to a pre-determined rendezvous point and eject its data package. The package would be recovered in midair by a C-130 Hercules and the drone would self-destruct.

The program to develop this system was canceled in 1966 after a drone collided with the mother ship at launch, destroying the M-21 and killing the Launch Control Officer. Three successful test flights had been conducted under a different flight regime; the fourth test was in level flight, considered an operational likelihood. The shock wave of the M-21 retarded the flight of the drone, which crashed into the tailplane. The crew survived the mid-air collision but the LCO drowned when he landed in the ocean and his flight suit filled with water.

The surviving M-21 is on display at the Museum of Flight in Seattle, Washington with a drone. The D-21 was adapted to be carried on wings of the B-52 bomber.

The YF-12 program was a limited production variant of the A-12 OXCART spy plane designed for the CIA and first flown in 1962. Lockheed was able to convince the U.S. Air Force that an aircraft based on the A-12 would provide a less costly alternative to the recently cancelled North American Aviation XF-108, since much of the design and development work on the YF-12 had already been done and paid for. Thus, in 1960 the Air Force agreed to take the 11th through 13th slots on the A-12 production line and have them completed in the YF-12A interceptor configuration.

The main changes involved modifying the aircraft's nose to accommodate the Hughes AN/ASG-18 fire-control radar originally developed for the XF-108, and the addition of a second cockpit for a crewmember to operate the fire control radar. The nose modifications changed the aircraft's aerodynamics enough to require ventral fins to be mounted under the fuselage and engine nacelles to maintain stability. Finally, bays previously used to house the A-12's reconnaissance equipment were converted to carry missiles.

Nearly a decade passed between the original conception of the OXCART program and the operational use of the A-12. After just 29 operational sorties, the A-12 were retired. At their retirement, in 1968, the eight non-deployed aircraft were placed in storage. The deployed A-12s returned from Japan to Palmdale, California and were also placed in storage. All surviving aircraft remained there for nearly twenty years before being sent to museums around the United States. On January 20 2007, after a bitter fight between Minnesota's government and the US Air Force, the A-12 preserved in Minneapolis, Minnesota, was dismantled to ship to CIA Headquarters to be displayed there. [4]

A-12 aircraft on display

The eight A-12's which remain in existence are lcoated at the:

The sole remaining M/21 variant is located at:

The sole remaining YF-12A is located at: 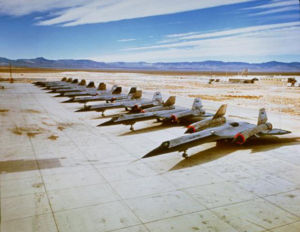 OXCART aircraft on the ramp at Groom Lake/Area 51 in 1964. There are ten aircraft in the photo; the first eight are OXCART machines, and the last two are Air Force YF-12As.