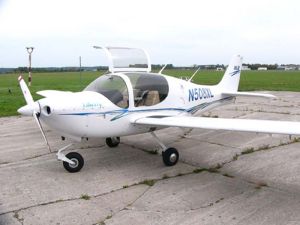 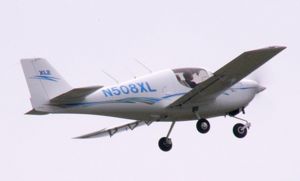 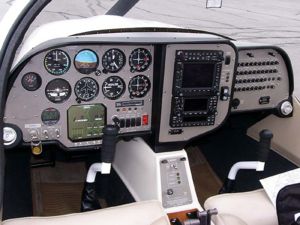 The Liberty XL2 is a two-seat, low-wing, general aviation aircraft manufactured by Liberty Aerospace of Melbourne, Florida for the personal transportation, touring and flight training roles.

The XL2 is a derivative of the Europa amateur-built kit touring airplane and motor-glider. It was type certified in 2004 under FAR Part 23 for VFR and IFR flight [1].

The Liberty was designed by company owner Anthony Tiarks. The aircraft has a composite fuselage and metal wings. The engine is a fuel injected dual FADEC equipped Continental IOF-240–B driving a Sensenich wooden fixed pitch prop.

The landing gear is of tricycle configuration and all three wheels are steel sprung. The nose wheel is free-castering and steering is by differential braking via two hand-controlled brake handles mounted on the centre console.

The wing features large fowler flaps pivoting on three scissor hinges per wing, with a maximum 30-degree deflection. The flaps are electrically powered and are controlled by a switch to the right of the radio stack. The flap indicator is a three-light system which shows when the flaps are at zero, twenty and thirty degrees. The flaps can be selected in between those settings but require visual confirmation of flap position. In later production aircraft the flap switch will be changed to a “pre-select” type.

The wing is rectangular with a 7:1 aspect ratio, no taper and no washout. Small stall strips are installed a few feet out from the root to aid stall performance.

The airfoil is a unique design, which the XL2 shares with its predecessor the Europa. This is a Don Dykins airfoil, designated as a “Dykins 12%”, because the wing’s maximum thickness is 12% of the chord. The airfoil is a semi-symmetrical, laminar-flow design.

The fuel is housed in a single fuselage-mounted tank with filler on the left side. The tank holds 28 US gallons useable and is fed to the engine via a simple on-off fuel selector.

The tail features a rudder mounted with a piano hinge on the right side only. The elevator is conventional and incorporates anti-servo tabs inboard on both sides to increase pitch stick forces. The controls are actuated by dual control sticks and conventional rudder pedals.

Cockpit access is via two “gull wing” doors. The seats are mounted in side-by-side configuration in a 48 inch wide cockpit. The seats are fixed in place with ergonomic adjustment achieved with seat cushions of different thicknesses and adjustable rudder pedals.

Standard avionics include a Garmin 530 GPS-Comm, a 430 GPS-Comm and a GTX 327 transponder, along with an intercom system and audio control panel. Engine instruments are all contained within a Vision MicroSystems VM-1000 panel.

The stall warning system is a voice annunciator that says “Stall, Stall”.

Under the right side of the instrument panel is a cannon DE-9 plug providing RS-232 which can be plugged into a laptop PC to download engine monitoring information. The software to run this is included on a CD-ROM which comes with the plane.

The fuselage must be painted mostly white to avoid potential heat damage to the carbon-fiber structure.

There is also a Pilots Association (with forums) at: http://www.libertyaircraft.org/