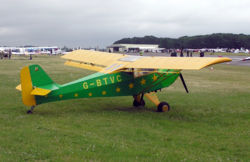 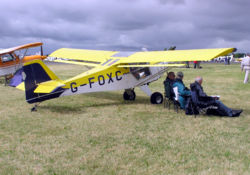 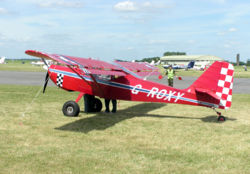 Originally designed, built and, manufactured by Dan Denney, the Kitfox is unique in that it was one of the first designs to make popular a quickly foldable wing that greatly eased transportation and storage. The aiplane is experimental (not FAA certified) and was originally designed to accommodate a Rotax engine (also experimental) but can commonly be found with a variety or other engines. The large appeal of the airplane was in large part due to the fact it could be built by any handyman in a two car garage and then towed to the airport with the wings folded. The design allowed for easy conversion to floats or skis.

At one point Kitfox was the largest small plane manufacturer in the world producing more airplanes a month than Cessna, Beechcraft, and Piper combined.

Flown in November 1984 from their Boise, Idaho, factory, the first Kitfox was a two-seat STOL aircraft, the Model 1. Similar in concept to the famous Piper J-3 Cub, the aircraft was a lightweight, two-place sport aircraft with good STOL (Short Takeoff and Landing) performance, enabling it to fly from short and unimproved airfields. Six Model 1 Kitfoxes were delivered the first year, after which the Kitfox range was expanded from the Model 1 to improved versions known as Models 2, 3, 4, and Classic 4. The Kitfox for several years held the record for shortest takeoff roll in an aiplane (21 feet) which took place at the national Sun 'n' Fun event in Florida in 1989.

In June 1992, SkyStar Aircraft corporation purchased the rights to produce the Kitfox kit from Denney Aerocraft, and began development of a completely new Kitfox, the Series 5. This larger aircraft was designed to fit the needs of pilots who wanted a recreational airplane that combined the best attributes of the Kitfox with greater useful loads, certified engines, increased cabin space, and larger cargo capacity. The changes made after the 1992 purchase are largely credited with the subsequent decline in popularity and performance of the airplane. All of which ultimately contributed to the later bankruptcy of the company.

In 2002, SkyStar introduced the new, high performance Kitfox Series 7, with cruise speeds of up to 160 mph (260 km/h), and a service ceiling above 25,000 feet (7600 meters). The new Series 7 was better adapted to the Sport Plane regulation than was the Lite Squared, and was therefore selected as SkyStar's entrant into the Sport Plane market. As understanding of the proposed Sport Plane rules increased, it became obvious that the specially-packaged version of the Kitfox Series 7, known as the Kitfox Sport, would not be needed, and that all three Kitfox airframes then in production (Lite, Classic 4, and Series 7) met the Sport Plane definition.

In late 2005, SkyStar Aircraft filed for bankruptcy, though the Eurofox (with no affiliation to the original Kitfox) remained in production in Europe. In early 2006, Kitfox Aircraft LLC acquired the production rights, tooling, patents, and trademarks for the Kitfox aircraft. The plane is now back in production.

This article or section does not adequately cite its references or sources.
Please help improve this article by adding citations to reliable sources. (help, get involved!)
This article has been tagged since October 2006.