The ERCO Ercoupe is a low wing monoplane first manufactured by the Engineering and Research Corporation (or ERCO) shortly before World War II. It was designed to be the safest fixed-wing aircraft that aerospace engineering could provide at the time, and the type still enjoys a very faithful following today.

Pre-history of the Ercoupe 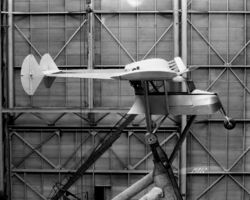 Fred Weick designed the W-1 with tricycle landing gear. It is shown in March 1934.

In late 1931, aeronautical engineer Fred Weick was the assistant chief of the aeronautics division of the National Advisory Committee for Aeronautics (NACA). A group of co-workers and he designed and assembled an experimental aircraft in 1934 with a group of his colleagues. Responding to a Bureau of Air Commerce sponsored design competition to build an easy-to-fly, safe aircraft, Weick and his friends worked on the project in their spare time and paid for it themselves.

The test aircraft built by Weick, known as the W-1, featured tricycle landing gear, a high parasol wing, and a pusher propeller configuration. The single engine was used for economy of operation and the tricycle gear was intended to prevent “nose over” landing accidents where the aircraft would flip over on its nose. Weick's design was influenced by the Stout Skycar as well as NACA research, which was first incorporated in the Hammond Y aircraft of 1934.

Weick left NACA in 1936 and joined ERCO's fledgling aircraft team as chief designer, primarily to continue improving his aircraft design. Focusing his efforts on a number of design issues, primarily simplicity and safety, Weick strove to create a reasonably priced aircraft that would not stall or spin. Retaining the tricycle gear (for ease of maneuvering on the ground), Weick switched to a low-wing monoplane configuration in his improved model, powered by a tractor propeller configuration.

The refined W-1A (originally known as the ERCO 310), which included a fully cowled engine, made its first flight in October 1937 and was soon renamed the “Ercoupe.” The twin-tail Ercoupe became an instant sensation because of its easy-to-fly design and unique design features, including a bubble canopy for great visibility. Lacking rudder pedals, the Ercoupe was flown entirely using only a control wheel: a two-control system linked the rudder and aileron systems, which controlled yaw and roll, with the steerable nose wheel. This wheel controlled the pitch and the steering of the aircraft, both on the ground and in the air, simplifying control and coordinated turning and eliminating the need for rudder pedals. A completely new category of pilot's license had to be created for Ercoupe pilots who had never used a rudder pedal.

The Ercoupe contained many innovative design features that produced an aircraft that was safe, easy to fly, and certified by the Civil Aeronautics Administration (CAA) as "characteristically incapable of spinning." The aircraft was designed by Fred E. Weick, a noted aeronautical engineer, who before coming to ERCO in 1936, worked for the National Advisory Committee for Aeronautics (NACA). The first experimental model of the Ercoupe was test flown at College Park airport in 1937. Construction of the production prototype was completed in 1939 and certification by the CAA was completed in 1940. The first Ercoupe, serial no. 1, was owned by George Brinckerhoff and flown at College Park Airport, and now belongs to the National Air and Space Museum.

Targeted at the non-professional pilot, the Ercoupe was also designed to be spin-proof with no dangerous stall characteristics. A placard, which was the first for any aircraft, was allowed to be placed proudly on the instrument panel reading: "This aircraft characteristically incapable of spinning." An elevator that could move upward and downward only a limited amount—13 degrees—plus automatic yaw correction, enabled the aircraft to actually fly itself out of a spin. Inexpensive to operate and maintain, the Ercoupe was able to fly into and out of small airfields, and its nose-wheel steering made taxiing almost like driving an automobile. The landing gear was also beefed up to allow for landing in a crabbed attitude in crosswinds since there were no rudder pedals to correct for runway alignment. When the main gear touched town, the side forces were absorbed and the nose would automatically swing forward to align the aircraft with the runway.

The two-seat ERCO Ercoupe 415 went on sale in 1940 but only 112 were delivered before World War II intervened, halting all civil aircraft production. By mid-1941, aluminum supplies were being diverted to war-related production, so ERCO decided to manufacture Ercoupes for military use by using wood as the principal building material. The substitution of wood resulted in a heavier Ercoupe, but the aircraft flew much more quietly because the wood absorbed vibrations from the engine and air flow. Ercoupes were flown during the war by the Civilian Pilot Training Program for flight instruction, and the Civil Air Patrol used them to patrol for German submarines.

A total of three model 415-C aircraft were procured by the United States Army Air Forces for use during World War II. 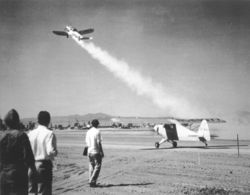 Take-off of America's first "rocket-assisted" fixed-wing aircraft, an Ercoupe fitted with a GALCIT developed solid propellent JATO booster with a thrust of 28 pounds force (125 N). The Ercoupe took off from March Field, California and was piloted by Captain Homer A. Boushey Jr.

On August 12, 1941, the first Air Corps rocket-assist takeoff was made by a Wright Field test pilot, Capt. Homer Boushey, using a small civilian-type Ercoupe aircraft. Subsequent refinements of this technique were made for assisting heavily-loaded aircraft in taking off from limited space. This technique is still used whenever needed.[5] 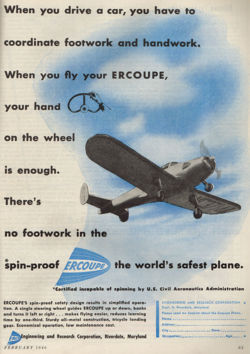 In February 1946, ERCO ran this full page ad for the Ercoupe

Although World War II had interrupted production of the Ercoupe, general aviation manufacturers were enthusiastic about the prospects of post-war sales. Thousands of men and women were trained as pilots by the government, and the hope was that they would want to include flying in their civilian life. Production of the model 415-C resumed in 1946, and in that year alone 4,311 aircraft were produced and sold at a cost of US$2,665. This was the same price as in 1941. At its peak, ERCO was turning out 34 Ercoupes per day, operating three shifts per day. The aircraft was aggressively marketed through non-conventional outlets such as the men's department of the Macy's department store chain.

Unfortunately, however, private aircraft sales slumped after the war and the bottom dropped out of the civil aircraft market in late 1946, bursting the bubble held by many aircraft manufacturers, who had expected that post-war prosperity plus a huge number of newly trained pilots would translate into a boom market for civil aircraft sales.

ERCO sold its remaining Ercoupe inventory to Sanders Aviation in 1947, which continued to produce the aircraft in the same ERCO-owned factory. A total of 213 aircraft were sold by 1950.

Universal Aircraft Industries of Aurora, Colorado purchased the Ercoupe design from the Engineering and Research Company in 1950. They provided spare parts and customer support to the then existing models. UNIVAIR sold the project to the Forney Aircraft Company in April, 1955.

In April 1955, Univair sold the Federal Aviation Administration aircraft type certificate for the Ercoupe to the Forney Aircraft Company of Fort Collins, Colorado, which later became the Fornaire Aircraft Company. This aircraft was similar to the 415-G except for engine and propeller combination, revised engine cowling, outer wing panels, metal covered, baggage compartment extended, modifications of seats and instrument panel. Production began in 1958 and ended in 1959

A total of 138 aircraft were produced.

Between August 1960 and March 1964, the rights to the Aircoupe aircraft were held by the AirCoupe division of Air Products Company of the City of Carlsbad, New Mexico. The company was established by the city, with the hope of establishing aircraft manufacture as a local industry. They purchased the type certificate from Forney when a potential deal with Beechcraft had fallen through. Only a few planes were ever produced before the type certificate was sold to Alon, Incorporated on March 16, 1964.

The two were part of a group of executives who retired from aircraft manufacturer Beechcraft to found their own company. They had previously negotiated with Forney Aircraft to purchase production of the Aircoupe so that Beechcraft could use the design as an introductory trainer. The deal was canceled by Olive Ann Beech, instead deciding to concentrate resources on the Beechcraft Musketeer. This decision caused the executives to leave Beechcraft. They set up shop in McPherson, Kansas where they purchased the type certificate for the Aircoupe from the City of Carlsbad, New Mexico on March 16, 1964.

"A new company formed by former Beechcraft executives Allen and Higdon, who have purchased all assets, jigs, tools, and engineering of the program from the city of Carlsbad NM. They expect to deliver the first of 30-50 Aircoupes to be built next year for about $8,000." (-- Aviation Week 3/30/64)

The Alon A-2 and A-2A Aircoupes were much improved upon models of the original Ercoupe which differed from it in several ways. The Alons featured a sliding canopy, a more powerful 90 hp (up from 75) Continental engine, separate bucket seats and a much improved instrument panel.

Another aircraft produced by Alon (although only a single example was ever built) was the A4. The A4 was a low wing 4 place monoplane of aluminum construction powered by a single 150hp Lycoming engine. By accounts, it was a promising aircraft, but it did not go into production before Alon closed.

Production of the A2 ceased in September of 1967, and on October 9, 1967, Alon was purchased by, and became a division of the Mooney Aircraft Company of Kerrville, Texas.

"1968, Mooney now produced the twin tail Alon Aicoupe A2 as the Mooney A2-A. The factory moved to Kerrville, TX, late in 1968. There they re-designed the fuselage from the cockpit back. Now, the Mooney A2-A could be recognized by the square windows behind the sliding canopy. Even as they produced the A2-A Cadet, the Mooney engineers were busy re-designing the coupe into something uniquely Mooney and completely un-weick-like.

The Ercoupe A Touch of Class by Frank Rytenhyde Saletri

The type certificate was sold again (and as of 2006, for the final time) to Univair Aircraft Corporation of Aurora, Colorado in October, 1974. 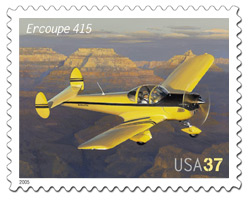 On July 30, 2005, the United States Postal Service released a stamp with an image of the Ercoupe 415 as part of its' American Advances in Aviation series.

Although no new Ercoupes have been produced since 1970, many spare parts are still available. Univair has owned the type certificate since 1974 for all Ercoupe models, and continues to produce parts as well as provide techinical assistance to Ercoupe owners. Ercoupe owners also enjoy an active type club that helps to organize and efficiently distribute updated information about their aircraft.

Renewed interest in the older models of the Ercoupe, the 415-C and the 415-CD, has been sparked by its status as the only existing, certified tricycle-geared aircraft that meets the FAA's new light-sport aircraft definition. This enables it to be piloted by holders of a sport pilot certificate.