The Fairchild C-119 "Flying Boxcar" was a U.S. military transport aircraft developed from the World War II Fairchild C-82 Packet, designed to carry cargo, personnel, litter patients, and mechanized equipment, and to drop cargo and troops by parachute. The first C-119 made its initial flight in November 1947, and by the time production ceased in 1955, more than 1,100 C-119s had been built. Its cargo hauling ability earned it the nickname "Flying Boxcar."

The Air Force C-119 and Navy R4Q was initially a redesign of the earlier Fairchild C-82 Packet, built between 1945 and 1948. The Packet provided service to the Air Force's Tactical Air Command and Military Air Transport Service for nearly nine years during which time its design was found to have several serious problems. All of these were to be addressed in the C-119.

In contrast to the C-82, the cockpit was moved forward to fit flush with the nose rather than its previous location over the cargo compartment. This resulted in more usable cargo space and larger loads than the C-82 could accommodate. The C-119 also featured more powerful engines, and a wider and stronger airframe. The first C-119 prototype (called the XC-82B) first flew in November 1947, with deliveries of C-119B's from Fairchild's Hagerstown, Maryland factory beginning in December 1949.

In 1951 Henry J. Kaiser was awarded a contract to assemble additional C-119's at the Kaiser-Fraiser automotive factory located in the former B-24 Liberator plant at Willow Run Airport in Romulus, Michigan. Initially, the Kaiser-built C-119F would differ from the Fairchild aircraft by the use of Wright R-3350-85 Cyclone engines in place of Fairchild's use of the Pratt & Whitney R-4360 radial engine. The Wright engine was a proven design used previously on the B-29, and though it lacked the R-4360's superchargers it proved to be virtually identical in performance, and possibly superior at higher altitudes. Kaiser would build 71 C-119's at Willow Run in 1952 and 1953 (s/n 51-8098 to 51-8168) before converting the factory for a planned production of the Chase C-123 that would never occur. The Kaiser sub-contract was frowned upon by Fairchild, and efforts were made through political channels to stop Kaiser's production, which may have proven successful. Following Kaiser's termination of C-119 production the contract for the C-123 was instead awarded to Fairchild. Most Kaiser-built aircraft were eventually turned over to the South Vietnamese Air Force. 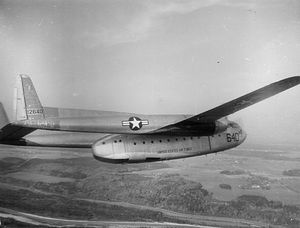 The aircraft saw extensive action during the Korean War as a troop and equipment transport. In July 1950, four C-119s were sent to FEAF for service tests. Two months later, the C-119 deployed with the 314th Troop Carrier Group and served in Korea throughout the war.

The C-119s saw service with the 456th Troop Carrier Wing which was attached to the Strategic Air Command from 25 April 1955 to 26 May 1956. The C-119s performed aerial recovery of high altitude balloon-borne instrument packages.

The C-119 would go on to see extensive service in Vietnam, beginning in 1954 with aircraft secretly loaned by the CIA to French forces for troop support. These aircraft were generally flown in French markings by American CIA pilots often accompanied by French officers and support staff. The C-119 was to play a major role during the siege at Dien Bien Phu, where they flew into increasingly heavy fire while dropping supplies to the besieged French forces. In a famous incident occurring on May 6, 1954 Lt. James McGovern, a hulking 260 lb WWII fighter ace nicknamed "Earthquake McGoon," and his co-pilot Lt. Wallace A. Buford were lost when their C-119 was shot down by North Vietnamese anti-aircraft fire while attempting to drop an artillery cannon during the last day of the siege. The aircraft flew another 75 miles before crashing on the banks of a river in Laos. McGovern, Buford and Life magazine photographer Robert Capa, killed later that month, were the only Americans known to have died in the French conflict in Indochina that set the stage for America's involvement in Vietnam a decade later. Lt. McGovern's remains were finally recovered in Laos in 2004. 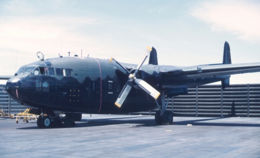 In Vietnam the troop-carrying C-119 would also take on many tactical and offensive roles. In its AC-119G "Shadow" variant, it was fitted with four six-barrel 7.62 mm mini-guns, armor plating, flare-launchers, and night-capable infrared equipment. Like the AC-130 it would be a potent weapon. The AC-119 was made more deadly by the introduction of the AC-119K "Stinger," which featured the addition of two 20 mm cannon, improved avionics, and two underwing-mounted J-85-GE-17 turbojet engines, adding nearly 6,000 lbf of thrust.

Other major variants included the EC-119J, used for satellite tracking; and the YC-119H Skyvan, with larger wings and tail. Another variant still seen today is the "Jet-Pack" version, which incorporates a 3,400 lbf Westinghouse J34 turbojet engine in a nacelle above the fuselage.

After its retirement from active duty, many C-119s and R4Q's soldiered on in the US Navy, Air Force Reserve and Air National Guard until the mid-1970s, and until recently they were still in use by the Taiwanese Air Force. The last military use of the C-119 by the United States ended in 1974 when a single squadron of Navy R4Q's based at Selfridge ANG Base near Detroit, Michigan, and two squadrons based at Naval Air Station Long Beach, California replaced their R4Q's with newer aircraft.

In recent years, several civilian-operated C-119s have found work as firebombers and transports in the northwest United States, and a few have begun making appearances at warbird airshows.

Many were provided to other nations as part of the Military Assistance Program, including Belgium, Brazil, Ethiopia, India, Italy, Nationalist China, and as previously mentioned, South Vietnam. The type was also used by the Royal Canadian Air Force, and by the United States Navy and United States Marine Corps under the designation R4Q.

The number of aircraft still airworthy is unknown. Over twenty C-119's are registered under civilian markings in the U.S. Two aircraft are currently flying in Alaska, and until recently Hawkins & Powers Aviation, an aerial firefighting company located in Greybull, Wyoming, were operators of a C-119G and C-119L, as well as the lone flying C-82. The company ceased operation in 2005 and these aircraft were made available for sale. Several C-119's currently parked or on static display in museum collections are also reported to be flyable, though their actual condition remains in doubt. It is likely that several C-119's still remain in operation in Southeast Asia.

The 2004 film, Flight of the Phoenix employed a C-119 instead of the C-82 Packet featured in the novel and original 1966 film. The studio had been offered the Hawkins & Power's flyable C-82, but the director favored the more graceful lines of the C-119 for this version. A C-119G owned by Hawkins & Powers Aviation Inc. and registered as N15501 was flown to Africa by a crew from Hawkins & Powers with the addition of a single jet mounted on the upper surface, which was then removed for filming. Three other ex USMC C-119Fs were also used for the various wreck scenes. 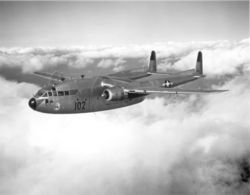