The Aviat Husky is a two seat utility light aircraft. It is the only all new light aircraft designed and placed into series production in the United States in the 1980s.

Design work, by Christen Industries, began in 1985, The aircraft is one of the few in its class designed with the benefit of Computer Aided Design. The prototype first flew in 1986, and certification was awarded the following year.

The plane featured a braced high wing, tandem seating and dual controls. The structure is steel tube frames and Dacron covering over all but the rear of the fuselage, plus metal leading edges on the wings. The high wing was selected for good all round visibility, essential for the many observation and patrol roles the Husky is suited for. Power is supplied by a relatively powerful, for the Husky's weight, 135 kW (180 hp) Textron Lycoming O360 flat four turning a constant speed prop. The high power loading and large wing area gives good short field performance.

Options include floats, skis and banner and glider tow hooks.

Husky has been one of the best selling light aircraft designs of the last twenty years, with more than 450 sold since production began. Many of the aircraft are used for observation duties, fisheries patrol, pipeline inspection, border patrol, glider towing and a range of other utility missions. Notable users include the US Departments of the Interior and Agriculture and the Kenya Wildlife Service which flies seven on aerial patrols of elephant herds as part of the fight against illegal ivory poaching.

The Husky comes in three versions: the original A-1A, the A-1B with several small improvements, and the Pup. The Pup has only a 160 HP Lycoming O-320, a fixed pitch propeller and it has no flaps. The Pup has the highest useful load.[1] The A-1B now comes in an even more powerful 200 hp version, the MD. 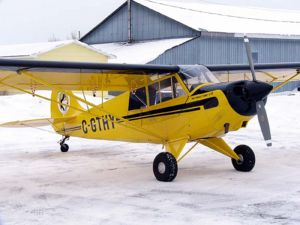