The AgustaWestland AW101 (EH101 before June 2007) is a medium-lift helicopter for military applications but also marketed for civil use. The helicopter was developed as a joint venture between Westland Aircraft in the UK and Agusta in Italy (now merged as AgustaWestland). The aircraft is manufactured at the AgustaWestland factories in Yeovil, England and Vergiate in Italy.

The orginal designation, "EH101", is a typographical error that stuck: the aircraft was originally designated EHI (European Helicopter Industries) - 01.

In spring 1977, the UK Ministry of Defence issued a requirement for an anti-submarine warfare (ASW) helicopter to replace the Royal Navy's Westland Sea Kings. Westland responded with a design designated the WG.34 that was then approved for development.[1] Meanwhile, the Marina Militare (Italian Navy) was also seeking a replacement for its (Agusta-built) Sea Kings, leading Agusta to discussions with Westland about the possibility of a joint development. This culminated in the joint venture being finalised in November 1979 and a new company (EH Industries Limited [EHI], based in London) being formed in June the following year to manage the project.

As the design studies progressed, EHI became aware of a broader market for an aircraft with the same capabilities as those required by the British and Italian navies. On 12 June, 1981, the UK confirmed their participation, with an initial budget of £20 billion to develop nine pre-series examples.[2] At the 1985 Paris Air Show at Le Bourget, Agusta showed a mock-up of a utility version of the new helicopter, leading to a more generalised design that could be customised. After a lengthy development, the first prototype flew on October 9 1987.

EHI was renamed AgustaWestland International Limited in January 2004 when parent companies merged. Consequently, in June 2007, the EH101 was re-branded as the AW101.[3]

The modular aluminium-lithium alloy fuselage structure is damage and crash resistant, with multiple primary and secondary load paths. Active vibration control of the structural response (ACSR) uses a vibration-cancelling technique to reduce the stress on the airframe. The EH101 is rated to operate in temperatures ranging from -40 to +50 °C. High flotation tyres permit operation from soft or rough terrain. The main rotor blades are a derivative of the BERP blade design, which improves the aerodynamic efficiency at the blade tips, as well as reducing the blade's noise signature.[4]

The cockpit is fitted with armoured seats for the crew, and can withstand an impact velocity of over 10 m/s. Dual flight controls are provided, though the EH-101 can be flown by a single person. The pilot's instrument displays include six full colour high-definition screens and an optional mission display. A digital map and Forward-Looking Infrared system display can also be installed.

The military version of the EH101 is powered by either three Rolls-Royce Turbomeca RTM322 turboshafts (UK, Japan, Denmark and Portugal), or three 1,491 kW General Electric CT7-6 turboshafts (Italy, Canada, Japan TMP). Engine inlet particle separator systems provide protection when operating in sandy environments. Each engine is supplied by a separate 1,074 litre self-sealing fuel tank using dual booster pumps. A fourth tank acts as a reservoir supply, topping up the main tanks during flight; while a fifth transfer tank can be added to increase range, as can airborne refuelling. The engines power an 18.59 metre diameter five-bladed main rotor. The rotor blades are constructed from carbon/glass with nomex honeycomb and rohacell foam, edged with titanium alloy. Computer control of the engines allows the EH101 to hover reliably in winds of over 80 km/h.

A chin FLIR is fitted to some variants. The EH101 is equipped with chaff and flare dispensers, directed infrared countermeasures, infrared jammers, missile approach warners, and a laser detection and warning system. It has two hard points for weapon carriers, on which the HM Mk1 model can carry four Sting Ray torpedoes or Mk 11 Mod 3 depth charges, though at present cannot use the Sea Skua missile. The Mk3 and 3a variants can mount General Purpose Machine Guns (GPMGs)in up to 5 locations in the main cabin pointing out of door or window apertures.

EH101 fuselage has a volume of 31.91 m² and the cargo compartment is 6.5 m in length, 2.3 m wide and 1.91 m high. The military version of the EH101 can accommodate up to 24 seated or 45 standing combat troops and their equipment. Alternative loads include a medical team and 16 stretchers, and cargo pallets. The cabin floor and rear ramp are fitted with flush tie-down points, a roller conveyor for palletized freight and a cargo winch. The ramp (1.91x2.3 m) can take a 3,050 kg load, allowing it to carry vehicles such as Land Rovers. A cargo hook under the fuselage can carry external loads of 5,440 kg. A rescue hoist and a hover trim controller are fitted at the cargo door.

The Italian Government ordered 20 EH101 helicopters with four options for the Italian Navy in the following variants [1]:

The first Italian Navy production helicopter (MM81480) was first flown on 4 October 1999 and was officially presented to the Press on 6 December 1999 at the Agusta factory. Deliveries to the Italian Navy started at the beginning of 2001 and were completed by 2006. Italian EH101s operate from major surface units, aircraft carriers and amphibious assault ships.

In 2007 the British Ministry of Defence acquired the six troop transport Merlins to alleviate a shortfall in British operational helicopters. In exchange the British have ordered six new-build helicopters from AgustaWestland as replacements for the Royal Danish Air Force.

On January 28 2008 one Danish EH101 broke the drive shaft from one engine to the gear box and made an emergency landing at Billund Airport. Following this incident the Danish fleet was grounded as a security precaution. The incident caused some national debate[6] about the future of the EH101 programmed in Denmark and whether it made sense to acquire different helicopters since the EH101 had very low availability (roughly 30%) due to mechanical issues. AgustaWestland, in turn, blamed the Danes for ordering spare parts very late and not keeping enough staff to properly service the helicopters[7].

The Portuguese Air Force has operated EH101s since 24 February, 2005, in transport, search and rescue (SAR), combat search and rescue (CSAR), fisheries surveillance (SIFICAP) and maritime surveillance missions. The 12 aircraft, in three versions, gradually replaced the Aérospatiale Puma in those roles. Only Portuguese Merlins are painted in a tactical green and brown camouflage.

The main role of the Portuguese EH101 is search and rescue in Portugal's expansive maritime zone. EH-101s are on constant alert at three bases: Montijo (near Lisbon, Portugal), Lajes (Azores) and Porto Santo (Madeira).

The Japan Maritime Self-Defense Force ordered 14 aircraft in 2003 to use in both the MCM (Mine Clearing Mission) and transport roles. The MCH-101 will replace the S-80-M-1 (MH-53E) for MCM, and the Sikorsky S-61 in a support role for Japanese Antarctic observations.

In November 2007, Algeria signed a contract for six AW101 helicopters.[8] The first aircraft will be delivered in 2009, with further orders possible. 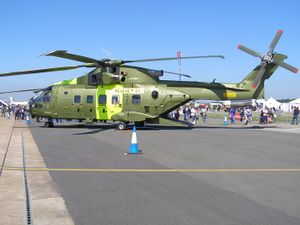 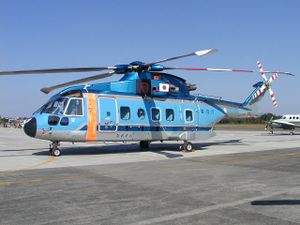 Five Merlins have been written-off and one damaged in accidents, of which three have been due to problems with the tail rotor hub cracking.

Wikinews has News related to this article: