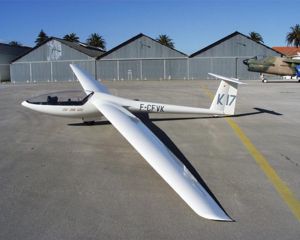 A DG-300 at Sintra Air Force Base, Portugal

The DG-300 is a Standard Class single-seat high performance sailplane built of glass reinforced plastic. The DG-300 was designed by Wilhelm Dirks and manufactured by Glaser-Dirks Flugzeugbau and later by the Slovenian company Elan. A total of 511 of all versions were built since production started in 1983. Representative contemporary types from competing manufacturers are the Rolladen-Schneider LS4 and the Schempp-Hirth Discus.

The DG-300 has a flapless wing with triple taper based on the Falcon designed by Hansjörg Streifeneder, and employs the HQ 21/II, a relatively thick profile (ca. 17.5%). This wing is 'blown' on the underside by 900 small holes to achieve a controlled transition from laminar to turbulent flow. As with any racing sailplane, the thickness of the wing makes it relatively sensitive to performance degradation due to contamination by insect impacts or rain drops.

It is agile and a good climber, but slightly underperforms compared to its competitors in cruising flight, especially at higher speeds. The later Dg-303 version with a new wing profile and winglets was developed that delivers higher performance at low to medium speeds plus increased aileron response. A fully aerobatic version (the Acro) is also available, stressed for +7/-5g.

The DG-300 has typical DG features, which improve comfort and safety if at a performance cost. It has the large cockpit typical of DG giving excellent comfort, especially in high altitude flight where the full-length canopy allows the feet to be warmed by sunlight. The view from the cockpit is superb, adding to the pleasure and safety of flight.

After the bankcrupcy of Glaser-Dirks the newly founded DG Flugzeugbau GmbH took over the servicing of these gliders.