Australian International Airshow is a large airshow held every two years at Avalon Airport near Geelong, Australia. It has been said by air show organisers to be the largest airshow in the southern hemisphere. It regularly features planes from the United States Air Force.

The airshow began in 1989 when Airshows Down Under was formed, after the 1988 Bicentennial of Australia.

The 1992 Avalon airshow, held in October, more commonly known as the Avalon 'Boat Show' after heavy rains almost washed Avalon off the map. The flight display line was perpendicular to the runway. 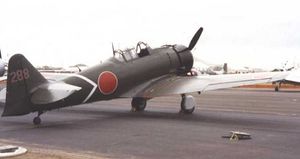 Mitsubishi Zero at the 2003 airshow

In 2003, there were 440 exhibitors from 30 countries. There were more than six hundred aircraft on the field. The central theme was the Centenary of Flight dating from the Wright brothers at Kitty Hawk. It included replicas from the early 20th century, such as a 1910 Hanriot replica and 1911 Curtiss Model D Pusher replica. There were also Tiger Moths, Sopwith Pup, Bleriot XI and a scale version of a Wright Flyer B and other similar aircraft. For jets it had a MiG-15, Meteor and Vampire. Some American planes such as the F-117 had been cancelled, due to possible anti-war protests. There was a model made of wood and fibreglass of an F-35. A Chinese military delegation was given a tour of the airshow. 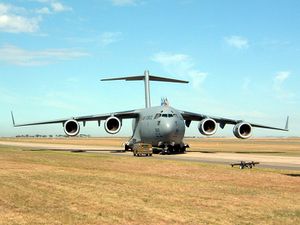 The theme in 2005 was "The Shape of Things to Come". The airshow increased Geelong's economy by $15.6 million.[2]. It was held from 15-20 March 2005, which featured many planes from ultralights to large military aircraft, such as:

The airshow is planned to be held between 20-25 March 2007. The theme is "Breaking the Barriers".