The ASK 21 is a modern glass-reinforced plastic two-seater glider with a mid-set wing and a mass balanced T-tail. The ASK 21 is designed primarily for beginner instruction, but is also suitable for cross-country flying and aerobatic instruction.

The ASK 21 was designed by Rudolf Kaiser as a modern counterpart to the popular ASK 13, in order to cover the need for a modern two-seater bridging the gap between initial training and single-seat performance flying. The ASK 21 is the first full GRP two-seater produced by Schleicher. The prototype had its maiden flight in December 1978 and production started in 1979. It remains in production to this day, with over 750 units already built. In December 2004 the ASK 21 Mi, a self-launching version, made its first flight.

The two seats are in a tandem arrangement with dual controls, adjustable rudder pedals and seatbacks. The fuselage consists of a tubular sandwich and thus offers passive safety with small component weight. The two-piece, mid-set, monoplane cantilever wing is a monospar glass fiber construction without flaps, but with upper side Schempp-Hirth-type spoilers. The wingtips curve downward, providing tip skids that allow take-offs without a wing helper. The T-tail possesses a fixed horizontal stabilizer and an elevator with spring trim and automatic connections. The undercarriage consists of two or three fixed wheels. The main wheel lies behind the centre of gravity and has a hydraulically operated disc brake. Checking the tire pressure is hindered by the need for removing the wheel fairing (which many gliding clubs remove permanently to aid regular maintenance and to reduce the risk of trapped grass being ignited by the wheel brake as it dissipates kinetic energy as heat). The tail unit has a rubber skid or a tailwheel.

The thick wing profile gives good low-speed characteristics (nominal stall speed approximately 65 km/h or 35 knots). The flight characteristics can be said to be extremely good-natured. The ASK-21 stalls in the most benign manner, from level flight, when speed is progressively reduced, the sailplane vibrate warning the pilot of the approaching stall, in this condition the nose of the sailplane does not even drop, but the variometer indicates an high rate of descent and the sailplane keeps vibrating and buffeting. By releasing back stick pressure normal flight is resumed. It is possible to stall the sailplane and make the nose drop decisively only from a climb attitude: from level flight, when keeping the sailplane in a 10 to 20 degree climbing attitude it will slow down and then the nose will pitch down to naturally resume normal flight. 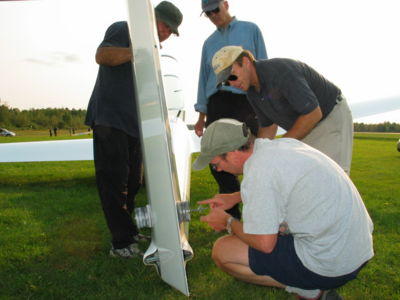 It is the perfect example of inherent stability, that will make the plane return to normal attitude by itself.
During stalls the ASK-21 wings remains leveled.
Some claim that even in a deep stall it remains entirely controllable.

It is very difficult, however not impossible to spin under normal conditions (all aircraft will spin).
To make it spin easily for training purposes or demonstrations a spin kit is available from the manufacturer. It consists of ballast discs applied to the tail to change the center of gravity according to the weight of the crew. With this device the ASK-21 when slowed to stall speed with rudder input drops one wing and start rotating, recovering with opposite rudder and release of stick pressure. Flown as a single-seater, the ASK-21 climbs in thermals as well as a K8. Most glider pilots and students have at one time or another flown the ASK 21.