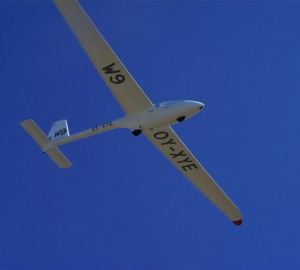 A PW-5 crosses the finish line at the 2001 World Air Games in Lillo, Spain.

The PW-5 was designed for, and won a competition held by the International Gliding Commission for a simple, low cost sailplane that would form the basis for a new competition class, the "World Class". Unlike other soaring competition classes, the World Class designation would guarantee that all pilots participated on an equal footing, and that pilots could not gain advantage by spending large amounts of money.

It was anticipated that thousands of PW-5s would be ordered, and that production would be licensed to different manufacturers, further reducing costs through an economy of scale to below 20,000 US dollars. For comparison, other competition classes often involve pilots spending upwards of 100,000 US dollars for state-of-the-art equipment.

The glider was designed at the Faculty of Power and Aeronautical Engineering of Warsaw University of Technology under supervision of Ph.D. Roman Świtkiewicz. It was originally built by PZL at its factory in Swidnik and first flew in 1993. The original members of the design team also set up a new factory at Bielsko in competition with PZL and have produced the PW-5 in small numbers.

Its wingspan is 13.4 metres. While the glider can climb well in thermals, its sink-rate at inter-thermal cruising speeds is poor compared to Standard Class gliders. It did not sell as well as expected and so the large economies of scale did not materialise. Older sailplanes with a better performance can be bought for less than the cost of a new PW-5. Though the PW-5 is still produced in small numbers, participation in World Class soaring events has declined recently. In total fewer than 200 PW-5's have been built, though over 70 have been exported to the United States, where there is a keen following.

The success of the PW-5 in the United States can be explained by the generally strong gliding weather that makes cross-country flights in low performance gliders feasible and rewarding, and by the popularity of the 1-26 monotype class to which the PW-5 is a natural successor.

Generally speaking, the PW-5 has found stronger acceptance in countries with good gliding weather. It has likewise made a positive contribution in poorer countries, or were gliding is still undeveloped. Schools and private owners there are often attracted by the simplicity and practicality of the type.

The countries with most registered PW-5 as of February 2004 were the USA (76), Argentina (33), Poland (27), New Zealand (25), Japan (18), Austria (14) and Canada (11). By contrast, some countries where gliding is well developed have only a handful of exemplars, to allow their national team members to enter competitions and pursue records in the class.

There are only two versions of the PW-5. The Bielsko version, identified as B1 PW-5, has a few safety and performance related improvements:

There is a project in progress for building a motoglider designated PW-5M based on the PW-5.

The PW-5 has a two-seater derivative, the PW-6.

‹ The template below has been proposed for deletion. See templates for deletion to help reach a consensus on what to do. ›