This article compares data from published mission reports of the United States Air Forces in Europe during World War II of the heaviest bomb loads carried by the B-17 Flying Fortress and B-24 Liberator as well as the weight of bombs each carried to their most distant targets. The purpose is to tie discussions of the relative effectiveness of these two bombers to real data and actual practice.[1]

The B-17 had the reputation of being the steadier platform, better for flying in formation. This was an advantage where tight box formations provided the 8th Air Force its best defense early in the war against German fighter planes. The plane carried 13 machine guns compared to the B-24’s 10, and it had a reputation of being very rugged. A greater weight of bombs could be carried (B-17G: 17,600 lb)[2] than was practicable.

The B-24’s wing provided the same lift as the B-17's but with less drag so it went faster under the same power and therefore farther with the same amount of fuel. This advantage was accomplished using the airfoil developed by David R. Davis along with Fowler flaps which gave necessary lift upon landing without adding drag during normal flight. Another advantage was the flexibility provided by the B-24's two bomb bays, each the size of the B-17’s one.

Both planes could gain more range by carrying auxiliary bomb-bay fuel tanks, but the B-17 paid a heavier penalty on the number of bombs that could then be carried. It could carry a 410 US gal tank on either side of the bomb bay with bombs on the other side. Or it could carry two such tanks and no bombs. Auxiliary fuel tanks of approximately 400 US gal (1500 L) each could be carried on either side of the B-24's forward bomb bay leaving both sides of the aft bomb bay for bombs. Both designs were limited by their Maximum Take-Off Weight's and any extra fuel carried was at the expense of the bomb load because fuel weighed about 6 lb/US gal (0.7 kg/L). Tanks in the wings of late-model versions of both planes carried a total of about 2,800 US gal (11,000 L) weighing about 17,000 lb (7700 kg).

The air defenses over the Continent were so effective that daylight raiders had to allocate much of an aircraft's weight-lifting capacity to defenses.

In the China Burma India (CBI) theater, one RAF commander stripped his B-24’s of what he considered excess weight (including all centerline guns) and carried 8,000 lb bomb loads at night to Bangkok, a roundtrip of over 2,100 miles, and 12,000 lb to Rangoon, a roundtrip of over 1,400 miles.[7] (See chart on right below).

To find data for this comparison, crew members’ first-hand mission reports posted to the web, and accounts reported in books written about daylight bombing in Europe in WW2, were searched for greater-than-average bomb loads and extra-long-range targets. These data were sorted to find the heaviest loads carried and the the most distant targets bombed. 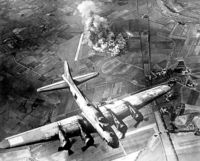 The heaviest bomb load carried by a B-17 was 8,000 lb and the furthest it was carried was to Nienburg, Germany[8]. The largest bomb load carried to its most distant target, Marienburg (now Malbork, Poland), was 4,540 lb[9]. These exceptional missions anchor the two ends of the maximum bomb-load line for the B-17. All other bomb loads carried by B-17’s over the Continent of Europe would lie below and to the left of the line. The average B-17 bomb load dropped in WW2 was between 4,000 lb and 5,000 lb.[10] 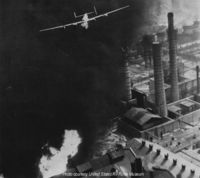 Sandman Getting Out of Dodge

The heaviest bomb load carried by a B-24 was also 8,000 lb and the furthest it was carried was to Karlsruhe.[11] The largest bomb load carried to the most distant target, Ploieşti, Romania (flying from Benghazi) was 3,500 lb (Operation Tidal Wave).[12] These anchor the ends of the maximum bomb-load line for the B-24. All other bomb loads carried by B-24’s in Europe lie below and to the left of that line. In the 8th Air Force, the normal tactical bomb load of the B-24 was 5,000 lb (Freeman, 2001:168).

The chart on the right below presents, for comparison purposes, the huge bomb loads carried at night by Royal Air Force Avro Lancasters over Europe, and B-24’s in the CBI. The chart on the left graphs the results described above.