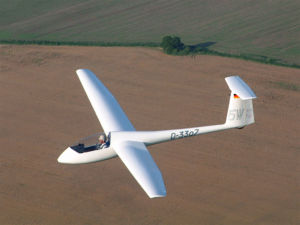 The G-102 Astir is a single seat glassfibre Standard Class sailplane, designed by Burkhart Grob and built by GROB. It was the first sailplane GROB serially produced, with the first flight in December 1974).

The Astir is of composite (fiberglass/resin) construction, has a large wing area, a T-tail and water ballast tanks in its wings. The large wing area gives good low speed handling characteristics but rather poor high speed performance compared to other Standard class gliders. In early versions some of the fuselage frame was wood, but this was replaced with a light alloy casting which sometimes cracks after heavy landings. The tail dolly was unusual by being plugged into a vertical hole. The hole had a tendency whistle at speed unless taped.

A flapped version called the Speed Astir was also produced with variants called II, IIb and G 104 G. A 17 metre version was offered. The prefix was felt by many to be optimistic, though 107 were built.

A slightly improved standard-class version, the CS-77, was introduced in 1977. It has a different rudder profile and a slimmer fuselage similar to that of the Speed Astir. The Standard III version followed in the early 1980's, reverting to the higher profile fuselage and with a reduced empty weight and an increased payload. The above specifications are given for the Standard III.

The Astir CS Jeans was similar to the CS 77, but had a fixed main-wheel ahead of its center of gravity, and a tailskid. Its cockpit was fitted in blue denim. Later versions were the Club II and the Club III which also had fixed gear, but the Club III had a tailwheel.

One Astir, flown by Robert Harris, broke the world absolute altitude record at 49,009 ft (14,938 m) on 17 February 1986. This record was broken in 2006 but this has still to be ratified by the Fédération Aéronautique Internationale.